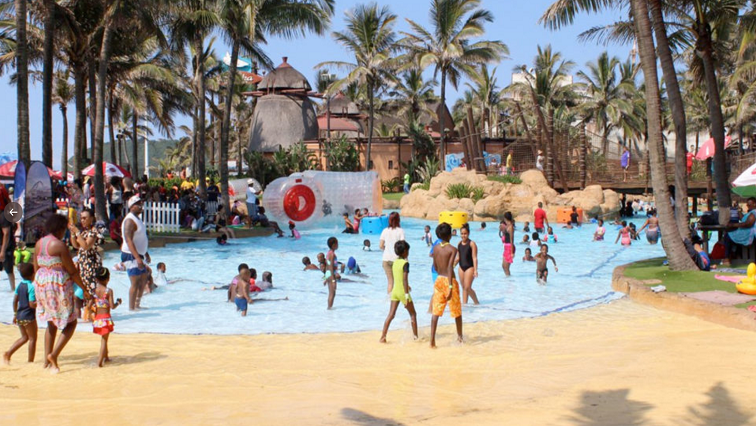 uShaka Marine World in Durban has dismissed claims that their water parks are packed to the maximum, despite the ban on gatherings of more than 100 people to prevent the spread of the coronavirus. A video which has gone viral on social media shows a huge crowd at the park’s adult swimming pool section dancing to a prominent local song and shouting ‘corona’.

The trending video is confirmed to be fake news by the management of uShaka Marine World. It many people concerned about the possible spreading of coronavirus at the theme park.

Management says all activities at the premises have been cancelled following the president’s announcement. According to uShaka manager, Mpume Mabuza, the video was taken in early March during a prominent festival at the park.

“It shows crowds standing in the pool singing and dancing shouting ‘corona’. We just warn people how important it is not to spread fake news. This is not happening right now or happened long before the president’s pronouncements. Right now, people visiting uShaka can see how empty this place is at the moment.”

Mabuza says the pandemic is having a negative impact on the park as they are losing millions. However, she says they will continue to obey the protocols in place to mitigate the spread of COVID19.

“It already has had a negative impact; we have seen numbers really reducing over the past week already so we anticipate that as we are monitoring on a daily basis. Our crisis committee will have a meeting on Monday and make decisions at that time. We have more than 10 000 animals in our aquarium so we have to make sure that there are people who still maintaining them and keeping them safe.”

In light of the President’s address to the nation regarding COVID-19, our main focus is the safety of our guests.
We’re closing all high-risk areas. We continue to evaluate risk implication for those that remain open.
Read more here: https://t.co/w9S80sp05k #COVID19SouthAfrica pic.twitter.com/q1oR0dOEJ6

Meanwhile, it was beach day as usual at the Durban Beach Front. This is despite a ban announced by the eThekwini Municipality prohibiting bathing and surfing at all Durban beaches.

The municipality has indicated that although bathing is banned, the public is still allowed to jog or take walks along the golden mile. However, a beach-goer in Durban says it is by far more risky to go to shopping centres than bathing at the beach.

Municipal spokesperson Musa Mayisela has sent a stern warning to all those who do not adhere to the rules. He says people might be fined or arrested.

The municipality says these closures are expected to be in place for the next two weeks.

In the video below, Durban beach-goers finding it difficult to adhere to COVID-19 social distancing ban.