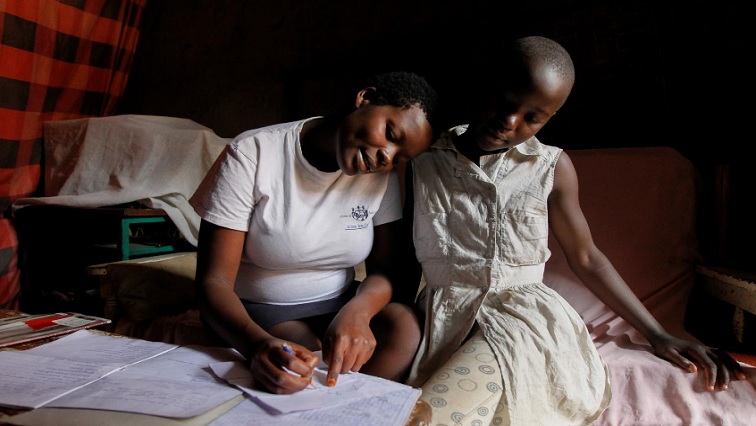 Jackline Bosibori wept when she found out she was pregnant. The 17-year-old’s mother, who is raising six kids alone, collapsed in their one-room home. They had been repeatedly threatened with eviction and couldn’t afford another mouth to feed.

“If I was in school, this could have not happened,” said Bosibori, who wants to become a lawyer.

With school closed due to the coronavirus pandemic and her mother out selling vegetables on the roadside, Bosibori got involved with a man in his twenties. When she told him she was pregnant, he stopped answering her calls.

During her pregnancy, Bosibori helped with chores like washing laundry in puddles in Kibera shanty town – a poor suburb of the Kenyan capital Nairobi where people live in tin-roofed homes crammed together and criss-crossed by railway lines.

In a nearby marketplace, she bought second-hand clothes for the baby.

In Kenya, some preliminary data suggests that is happening.

In the far northern town of Lodwar, teenage pregnancies among clients of the International Rescue Committee aid group nearly tripled to 625 in June-August this year, compared with 226 in the same period a year earlier, IRC data show.

In the nearby refugee camp of Kakuma, adolescent pregnancies among clients jumped to 51 in the March-August 2020 period, compared with 15 in the same period in 2019.

At the clinic that Bosibori attended for antenatal visits – often with her classmate, who also became pregnant around the same time as her – the number of expectant girls has been climbing.

“Since COVID-19 started, we are having more,” said nurse Joy Ambiyo.

And more pregnant girls may be skipping doctors’ visits altogether.

“We know that young girls who get pregnant do not access healthcare services like adult females because of the judgment,” said Ademola Olajide, the United Nations Population Fund representative in Kenya.

That makes them more vulnerable to health complications and unsafe abortions, he added.

Globally, pregnancy and childbirth are the leading causes of death for girls aged between 15 and 19, according to the World Health Organization.

Bosibori had some complications of her own. Her doctors recommended a caesarean section, but she and her mother Ann were apprehensive and sought approval from a traditional healer.

With the healer’s blessing, Bosibori had the procedure and delivered a healthy 3.3 kg baby girl.

“I am happy the baby is here, the anxiety is now over,” said Bosibori as she held her new-born child on the family’s only bed, flanked by dusty old speakers that act as bedside tables.

Until January, when Kenya’s schools are set to fully reopen, Bosibori will be caring for the baby full time, squeezing in revision when she can.

After that, Ann, who had Bosibori when she was 18, said she’ll find a way to care for her grandchild.

“The girl has to go back to school.”