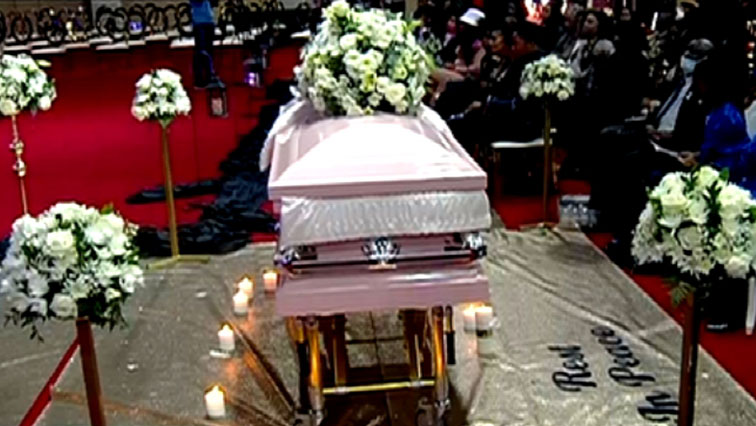 The late queen of Kwaito Nomasonto “Mshoza” Maswanganyi, has been laid to rest at the Westpark Cemetery in Johannesburg, on Saturday.

A daughter of Soweto and the First Lady of Kwaito, Mshoza, as she was popularly known, took a male-dominated genre by storm.

She died after complications from diabetes last week. The 37-year-old rose to fame with her smash hit ‘Kortes’ in the early 2000s.

As SABC’s Maageketla Mohlabe reports she had people put on their dancing shoes before and during democracy:

Mshoza has been described as a legendary figure, whose name has been added to a list of music icons. Her uncle, Professor Resenga, says Mshoza was a daughter like no other.

“As a family, we are consoled that she lived her life in full, she went about her life in her bubbly and high spirited ways. It’s not the years you have lived that count but how you have live. She was a genuine humanitarian and never afraid to express her feelings.”

Going down memory lane, her high school friend Thabile says she has always been an entertainer. “She would make people dance. She would run the auditions for people to dance for her school group. She always insisted she was the Lebo Mathosa in the group, as short as she was. I love you friend, and I always think of our last conversation in July.”

While an emotional Nandi – who was a close friend for about 15 years – could not hold back her tears. “I’ve been numb since the day I heard she has left us. I will carry you in my heart. I love you nana.”

TV and radio personality, Khanyi Mbau, says she never imagined burying her friend. Mbau says what gives her comfort is that Mshoza’s name will be added among the legends.

“Nomasonto here we are today, I never thought this day would come. We always said we would grow old together. Today we celebrate a woman who knew exactly who she was. It’s often that people listen to her inner child. Her communication was music, the loudest form of art. A gift of the form of therapy to most of us. But behind the child star, kwaito queen, Godmother and now transcended into an iconic figure. A legend added into the history of South African music.”

Her children say they don’t know how they will make it without their mother. Tebogo Nyoti shared a message from the Magwanganyi children, Pride and Jacob Junior.

“Mommy I’m at a loss for words, I wasn’t ready to lose you. I don’t know how I’m going to make it without you. My best friend, my lifeline, my other half, my inner peace, my core. Thank you for bringing me this far. I will not let your legacy die. Fly high my queen, you have left a mark and a void in my heart that no one can fill. I’m going to miss you, our mini-concerts that we had together. Like you said ‘ngizokubona futhi’ next time. I love you, mommy.”

Mshoza was a versatile artist. Her spiritual side led to the release of  Mshoza Nabafundisi and as Christian Heath explains, she also dabbled in rock.

“She wrote a song called  Let me live my life, media-influenced, she was extremely talented and had a good heart.”

Musician Slovas hailed her achievements in the male-dominated industry. “She was intelligent and she was streetwise. That’s what sets her apart. “

Kwaito legend Mapaputsi says Mshoza lived kwaito and was a true definition of what kwaito is.

“Mandoza, is with her now, Brown Dash, Johny Clegg, her legacy will live. Let’s promote our local music. Sonto loved kwaito deeply; she’s from Zola and knows this is our lifestyle. Kwaito is culture, kwaito is South Africa.”