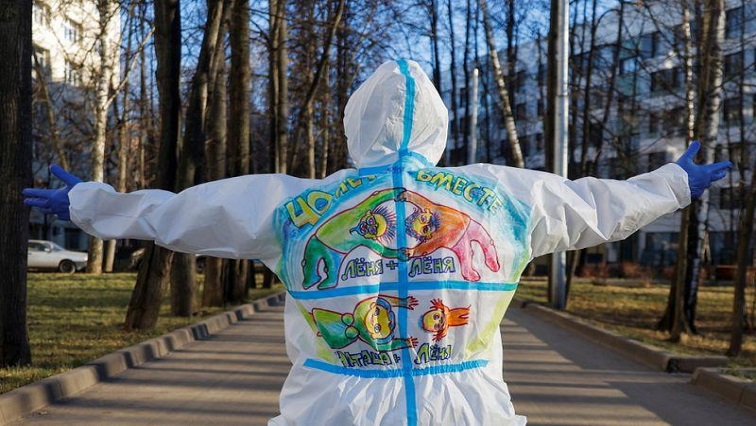 With medics and helpers covered in masks, medical glasses and protective suits, it is sometimes hard to convey festive cheer to the patients on Moscow’s COVID-19 wards.

But Leonid Krasner, who has been volunteering at a hospital since the first wave, has found a way with the colourful pictures he draws on the back of his overalls to help patients recognise him and bring a smile to those being treated.

Krasner, 59, decorates his single-use suits before entering the wards every time he is in the hospital. He once drew a cartoonish plane for a sick pilot and a congratulations card for a mother on Mother’s Day.

“This is to boost your mood and your immune system,” he told an old lady with an oxygen mask, charmed by the Christmas tree daubed on his back.

During the outbreak’s second wave, Moscow has registered around 6,000-7,000 new infections every day, about a quarter of Russia’s nationwide caseload, and it has had to open several temporary hospitals, including one on an ice rink.

Krasner and some of his fellow volunteers are tasked with looking after the weak patients discharged from intensive care units to regular wards. They help them with every day things like combing their hair, brushing their teeth and shaving.

A former businessman, Krasner was one of dozens of Muscovites with no prior medical experience who volunteered to help at coronavirus hospital number 52 in spring when the outbreak hit the Russian capital.

He ended up catching the virus himself shortly after his first shifts and it took him two weeks to recover at home before he could get back to his patients.

“Even if a person is in a bad way and is sick, they still need emotions. This cheers people up,” said Krasner outside a ward where he had been massaging the legs of a recovering patient.