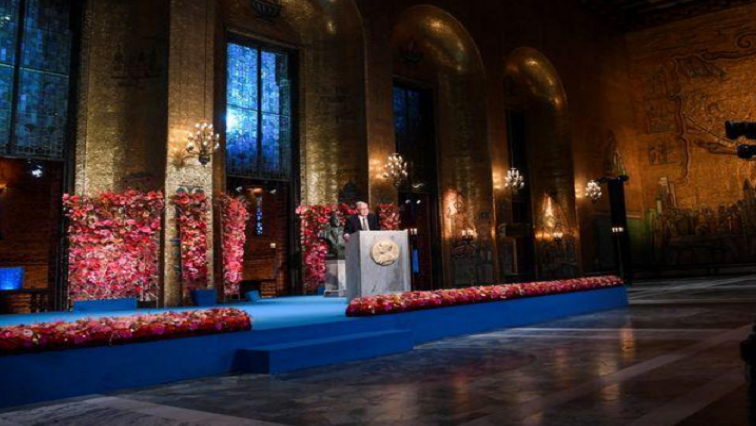 Dressing down, the 2020 Nobel winners got their awards in a broadcast aired on Thursday as, thousands of kilometres away and sitting two metres apart, musicians played classical interludes in an almost empty auditorium.

In a disconnected ceremony at the end of a disconcerting year, Swedish television streamed the handovers from Stockholm City Hall on the day when a packed audience traditionally honours the prizewinners.

“This is, indeed, a different Nobel Prize ceremony,” King Carl XVI Gustav, who usually hands out the awards, said in a message from the royal palace.

With the coronavirus pandemic raging, all this year’s winners stayed at home, too.

Michael Houghton, joint winner of the Medicine prize along with Harvey Alter and Charles Rice for work on the Hepatitis C virus, was in his garden in California.

Houghton’s attire – a comfy, zip-up sweater – was a far cry from the high fashion usually worn for the ceremony and glitzy banquet, attended by royalty and the cream of Swedish society.

Literature winner Louise Gluck received her prize in her garden in Boston, in a sheepskin coat.

Some of the other winners wore suits, while physics laureate Reinhard Genzel came closet to donning the regulation white tie and tails by wearing a tuxedo.

Some wore masks, others not, to accept the medal and diploma that accompanies the 10 million Swedish crown ($1.18 million) awards, established in the will of Swedish dynamite inventor and businessman Alfred Nobel.

Having missed the chance to bask in the glow of public adulation during 2020, this year’s laureates have been invited to attend the 2021 festivities – COVID permitting.

“We hope next year we will have the opportunity to celebrate … in the proper, customary way,” Berit Reiss-Andersen, the chair of the Norwegian Nobel Committee, said.