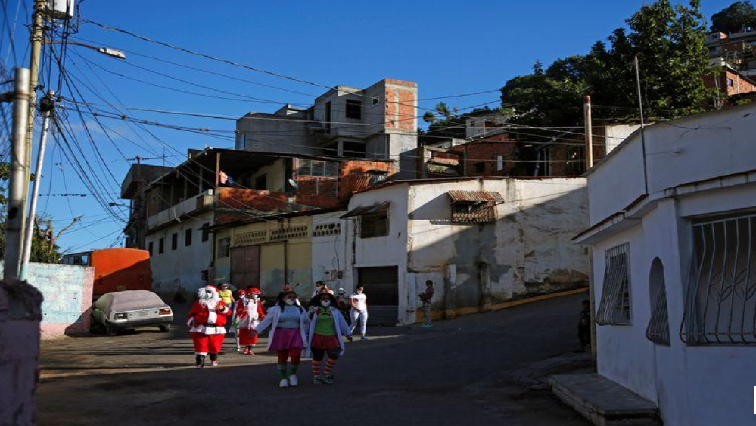 Santa Claus walked the streets of the outskirts of Venezuela’s capital Caracas this weekend, giving children gifts ranging from bread to clothes at a time when the country is struggling with the coronavirus pandemic and an economic collapse.

Venezuelans are once again celebrating Christmas in crisis as the OPEC nation completes a sixth year of recession and a third of hyperinflation that has destroyed spending power and fueled a mass migration.

The non-profit group Santa in the Streets, which for 14 years has received donations of clothing and toys and given them to families and children in poor areas of the country, on Saturday handed out gifts in the suburb of Guarenas.

A young man named Raymar dressed as Santa Claus approached lines of children who waited with their parents to receive bread and bologna, clothes, shoes and toys.

Amilcar Ruiz, local coordinator for Santa in the Streets, said that this year the group handed out more food due to the needs faced by the community under the pandemic. In previous years, the group has brought more toys.

“(The community) said ‘Don’t leave us out,’” said Ruiz. “Families have (less capacity) to feed their children.”

Venezuela’s monthly minimum wage is equivalent to a dollar, which is barely enough to buy a kilo of rice.

President Nicolas Maduro last year authorized the widespread use of dollars for the first time in 15 years, boosting commerce but also creating a growing gap between those with access to greenbacks and those making the local bolivar currency.

“There is a pandemic, but people need a hug, a piece of bread,” added Juan Monroy, one of the organisers of the activity.