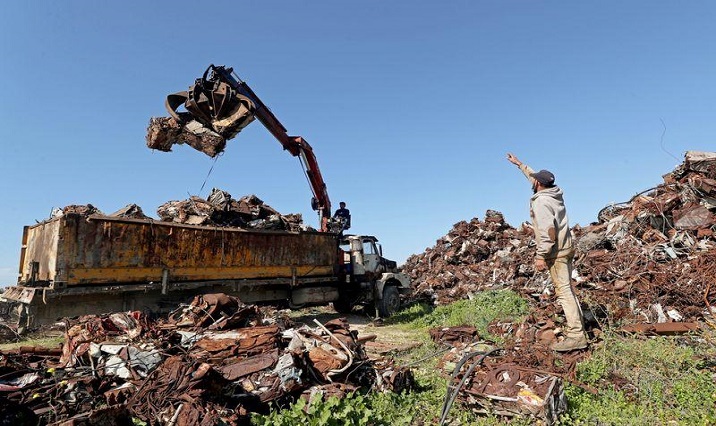 The rusting hulks of thousands of old cars brought into Gaza from Israel decades ago have long been piled up in Mad Max-style wastelands of decaying metal that scar the northern part of the Palestinian enclave.

Although the route up the coast to the Israeli cities of Jaffa, Haifa has been blocked to Palestinian vehicles and drivers by Israeli walls and checkpoints for years, a shift in Israeli policy means that thousands of the old cars and other pieces of scrap metal are now finally leaving Gaza.

Palestinian merchants estimate that some 200 000 tonnes of metal waste – from used truck parts to empty soda cans – have accumulated along Gaza’s frontier since the imposition of an Israeli-led blockade in 2007.

But Israeli authorities in October cleared the metal for export to crushing plants inside Israel, creating a welcome source of revenue in impoverished Gaza.

Gazans sell the scrap metal for around $228.16 per tonne. Israel allows 1000 tonnes to be exported per week, a pace that would clear the backlog in four years.

Merchants say the exports have secured work for around 6000 Palestinian labourers in Gaza, where unemployment is 49%.

“There is almost no work in town,” said Emad Aqail, 39, who sorts metal into pressing machines ready for export. “Working in metals is exhausting, but it gives me the income I want.”

Many Gazans would prefer to crush and recycle the metal for use inside the enclave, which is home to more than two million Palestinians.

But Israel and Egypt restrict the entry of machinery into the Gaza Strip, citing the security threat posed by its Islamist rulers, Hamas. Among the equipment prohibited is anything that could be used by militant groups to manufacture weapons – including new metal pressing machines.

Israel said the new scheme has so far earned around 3 million dollars for Gazans.