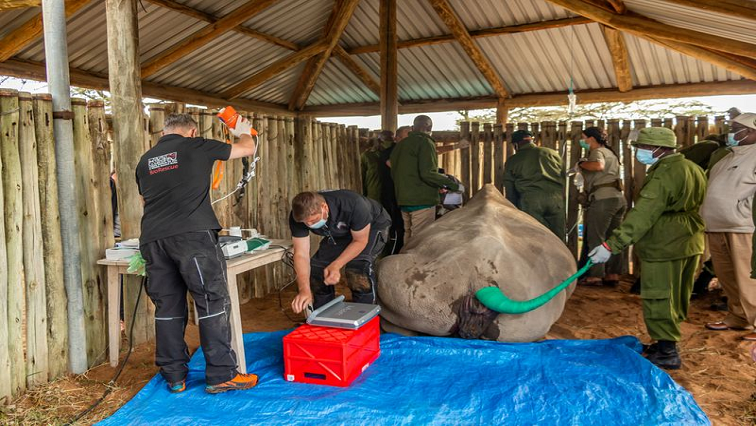 Scientists racing to save the northern white rhino from extinction have harvested 10 more eggs from the last two females alive which they hope will help create viable embryos that can be incubated by other rhinos acting as surrogates.

The northern white rhino once wandered through east and central Africa but, as with other rhino species, its numbers plummeted due to heavy poaching.

Northern white rhinos, now the world’s most endangered mammal, have hairier ears and tails, are shorter and stockier and have different genes than their southern cousins.

Scientists first harvested eggs from the females in 2019, as part of a team from the Ol Pejeta Conservancy, Kenya Wildlife Service, Italian-based Avantea Lab, the Czech Republic’s Dvůr Králové Zoo, and the Germany-based Leibniz Institute for Zoo & Wildlife Research.

They produced three pure northern white rhino embryos that are now frozen. But the scientists realised they must synchronise implanting embryos with the reproductive cycle of the surrogate mothers. The more embryos they have, the better.

One potential snag is that humans do not know how to detect when the time to insert the embryo is right.

A southern white rhino bull will be sterilised, transported to Ol Pejeta and set loose among potential surrogate mothers. His response will signal when they are on heat.

“Thanks to his activities we would be able to identify the right time for inserting the embryo,” team coordinator Jan Stejskal, from Dvůr Králové Zoo, told Reuters.

“We start early in the morning, the first female is immobilised and then the procedure lasts for about two hours,” Stejskal said of the egg harvest.

The eggs are so delicate they must be immediately flown to a laboratory in Europe in an incubator hand-carried by a scientist.

“If you want to start a population of the northern white rhino, one baby is not enough, you need as many babies as possible,” Stejskal said.