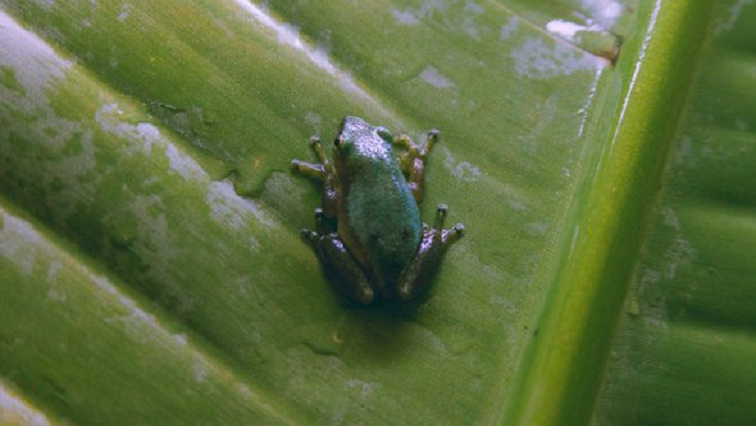 In a boon for biodiversity, a species of frog that is endemic to the KwaZulu-Natal coastline has been reintroduced to its natural habitat at Verulam, outside Durban.

The Pickersgill Reed Frog is listed as critically endangered on the Red List of Threatened Species.

The collaborative effort to restore this species is largely due to the gazetting of a biodiversity management plan by the Department of Environment, Forestry and Fisheries in 2017.

It’s enabled scientists from the eThekwini Municipality, Johannesburg Parks and Zoos and the Endangered Wildlife Trust to work together to save these critical frog species.

Efforts to revive the species is bearing fruit. Since 2017 a project at the Johannesburg City Parks and Zoo has been breeding Pickersgill Reed Frogs in captivity.

Project Co-ordinator for the Amphibian Research Project Ian du Plessis says out of an initial breeding population of just 50/9 in 2017, the project has released over 700 Pickersgill Reed Frogs back into its natural environment.

“We know they’ve got seven distinct life stages where most other amphibians only have four and we also know there are more males being hatched than females. Females live longer in a captive environment. Even the feeding, we found that other reed frog species has been found to be cannibalistic in a tadpole phase whereby the Pickersgill Reed Frog as a tadpole is completely herbivorous. So, we’ve got a mixture of fish flakes and spirulina we use to feed it while the adults are completely ‘insectable’. So, they feed on various insects we provide,” says du Plessis.

It’s an oddly cold and rainy day for Durban on the cusp of summer. Muddy, misty conditions hang over the wetlands at the Buffelsdraai Reforestation Site. Ironically it’s the perfect mood for the release of a few croaking Pickersgill Reed Frogs into their natural environment, here, among the tall, green, firm reeds.

Manager of the Threatened Amphibian Programme, Doctor Jeanne Tarrant, from the Endangered Wildlife Trust, says, “It is very specialised in terms of its habitat preferences. So, the Indian Ocean coastal belt wetland which they’re trying to recreate here is itself a critically endangered habitat type and it only occurs on the east coast and we’ve lost a lot of that through the agriculture of sugar cane, houses, mining. And so, all these threats are destroying the habitat.”

When Tarrant began her work on this species of frog in 2008, it was only recognised at eight sites in KwaZulu-Natal. This has now increased to 38. A sign of progress.