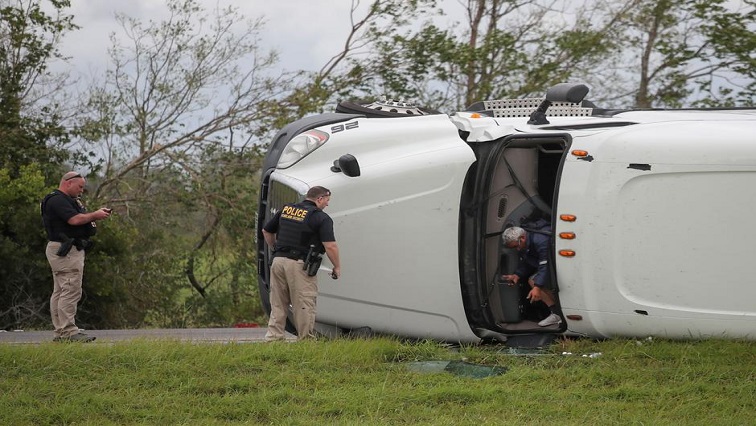 Hurricane Laura barreled through southwest Louisiana, destroying buildings in the city of Lake Charles and killing a 14-year-old girl after making landfall early on Thursday as one of the most powerful storms to hit the state.

The hurricane’s first reported US fatality was a 14-year-old girl in Leesville, Louisiana, who died when a tree fell on her house, a spokeswoman for Governor John Bel Edwards said.

“We do expect that there could be more fatalities,” the spokeswoman, Christina Stephens, said on Twitter.
Residents of Lake Charles heard Laura’s winds howling and the sound of breaking glass as the storm passed through the city of 78,000 with winds of 85 miles per hour (137 km per hour) and gusts up to 128 mph (206 kph) in the hour after landfall.

The windows of the city’s 22-floor Capital One Tower were blown out, street signs were toppled and pieces of wooden fence and debris from collapsed buildings lay scattered in the streets, video footage on Twitter and Snapchat showed.

“I never even boarded up my windows. I didn’t think to do that. This is the first hurricane I’ve experienced. I just hope my house is fine,” he told Reuters in a telephone interview.

Laura made landfall just before 1 a.m. as a Category 4 storm packing winds of 150 mph (240 kph) in the small town of Cameron, Louisiana, the National Hurricane Center (NHC) said.

It rapidly weakened to a Category 2 storm Thursday morning with maximum sustained winds of 100 mph (160 kph), and was forecast to become a tropical storm later in the day.

However, the NHC warned that the threat of a possibly deadly storm surge would continue along the Louisiana coast as Laura moved north and then northeast.

Cameron Parish, where Laura made landfall, has a population of just under 7,000 and is home to a national wildlife refuge. The marshland there is particularly vulnerable to a storm surge of ocean water.

“This is one of the strongest storms to impact that section of coastline,” said David Roth, a National Weather Service forecaster. “We worry about that storm surge going so far inland there because it’s basically all marshland north to Interstate 10. There is little to stop the water.”

The storm surge, which the NHC on Wednesday predicted would be “unsurvivable,” was still forecast to raise water levels up to 20 feet (6 meters) in parts of Cameron Parish on Thursday morning.

“This surge could penetrate up to 40 miles inland from the immediate coastline, and flood waters will not fully recede for several days after the storm,” the NHC said on Thursday.

Besides threatening life, the storm slammed the heart of the U.S. oil industry, forcing oil rigs and refineries to shut down production.

The Port of Lake Charles remained closed as workers were unable to enter or exit the facility due to downed power lines and trees.

The port did not suffer significant flooding but power was out as of Thursday morning, manager of security and safety Ed Manint told Reuters. The harbor police were assessing the damage and would send a report to port administration, he said.