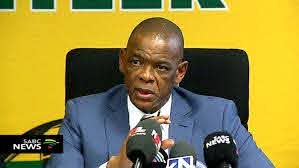 African National Congress (ANC) Secretary-General Ace Magashule could not be drawn into what he is going to say at the party’s Integrity Commission.

Speaking to the media during a walk-about at the Ramaphosa Informal settlement in Ekurhuleni earlier this afternoon, Magashule only said he will appear before the George Mashamba Commission on Saturday as scheduled.

His appearance at the Integrity Commission relates to the criminal case he is facing in the Bloemfontein Regional Court emanating from the more than R200 million asbestos project while he was Premier in the Free State.

He said the Integrity Commission is effective and must be respected by all members.

“I shouldn’t preempt the structure we have created. The Integrity Commission is a committee of people that we think we need to respect. It has been effective; they have been doing their work. We have seen when people were supposed to go to Parliament there were issues and they dealt with all those issues and the ANC managed to deal with its own issues.  You deal with issues not just legally, you deal with issues also politically.”

President Cyril Ramaphosa announced yesterday that Magashule will appear before the commission, following the National Executive Committee meeting. Ramaphosa said that they agreed to implement the ANC resolution on the fight against corruption.

He said they have resolved to deal with all members who are facing criminal charges, insisting that all those will be cascaded to provinces.