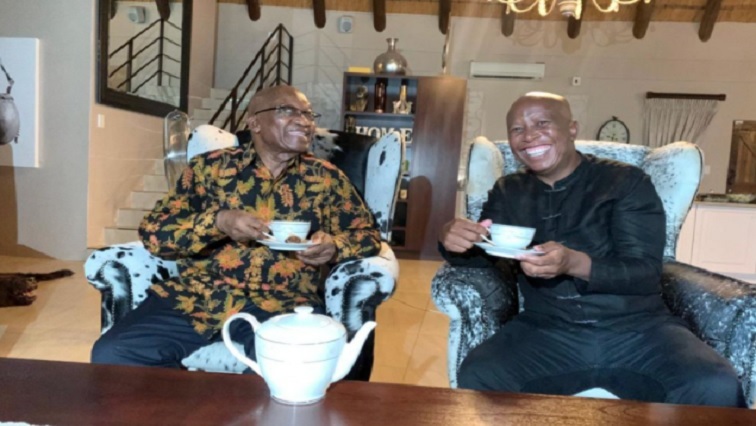 The meeting has raised some eyebrows with some public speculations that Malema possibly tried to persuade Zuma to rethink his decision to ignore the ruling of the Constitutional Court, which ordered him to appear before the State Capture Commission.

The meeting took place at Zuma’s homestead at Nkandla in KwaZulu-Natal.

“The meeting went very well. The tea was nice and sweet, but was essentially what it was. It was a tea meeting. There was no agenda, you know. As the invite said, let’s have tea, so they had tea. There was no discussion around any other thing around anything that you are imagining. So, let’s stop with the gymnastics of speculation and trying to be prophets. Bushiri is no longer here. So, let’s not try to replace him,” he says.

[In Pictures]: The CIC @Julius_S_Malema at the Former President of South Africa, Jacob Zuma’s Homestead in Nkandla, having TEA. pic.twitter.com/1JzFNz2lIw

Ramaphosa weighs in on the Zuma matter

Earlier, President Cyril Ramaphosa pleaded with South Africans to give Zuma time and space to make a proper decision about appearing before the State Capture Commission.

“This is a matter that I’m sure he’s going to give much thought to because he’s being counselled by a number of people and a number of organisations, that the constitutional structure that he contributed so much to needs to be given consideration and I’m sure at his own time, in his own mind, he will think about all these and I would like to say, let’s give former President Jacob Zuma time and space to think about this,” he said.

Ramaphosa has not ruled out a meeting of the African National Congress’ top six officials with former President Jacob Zuma to convince him to cooperate with the State Capture Commission.

Zuma has vowed not to appear before the Commission despite a Constitutional Court ruling compelling him to do so. Ramaphosa says a meeting with Zuma is still a possible option.