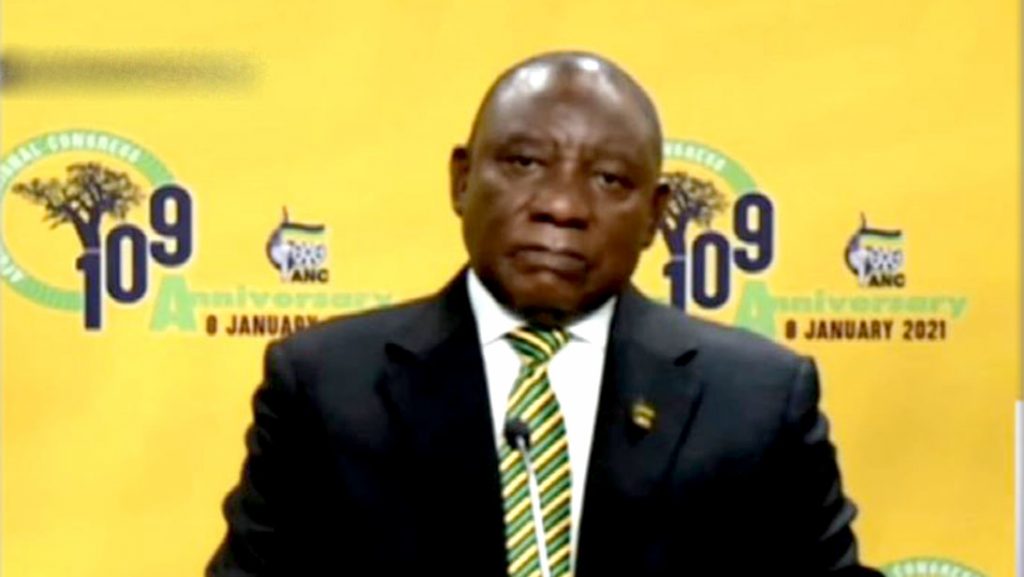 The African National Congress (ANC) celebrates its 109th anniversary, but due to the COVID-19 pandemic, party president Cyril Ramaphosa delivered the January 8 Statement virtually this year.

In his address, Ramaphosa outlines the party’s priorities for 2021. He says despite the challenges during the apartheid era, the ANC leaders still found a way to the people.

“It was a time of great upheaval. The people of our country were suffering under a repressive regime. The liberation movements were banned, and our leaders were imprisoned, banished or exiled. And yet, even without being allowed to gather or to organise, and without our leaders being in their midst, the message of the ANC found its way to our people. It gave them strength, hope and courage. It lit the path to our people’s victory over apartheid.”

Ramaphosa urges party members to fix their eyes on its mission, despite the challenges, before highlighting the following priorities for 2021:

This is the party’s foremost and immediate priority for 2021. Ramaphosa says the virus threatens the livelihood, health and wellbeing of all South Africans. The party has to intensify efforts to promote responsible behaviour, strengthen the health system and maintain community health interventions such as screening, testing and tracing. Implement mass vaccinations to achieve herd immunity and prevent ongoing transmission.

Place economy on path of renewal and recovery

Promote investment in sectors such as agriculture, manufacturing and mining and tourism. Provide support to key sectors such as poultry, sugar and automotive, as well as small-scale manufacturers and township and rural entrepreneurs. Emphasis on localisation so that South African businesses benefit from all areas of economic activity.

Tackling poverty and improving people’s lives – Intensify all measures to improve the lives of the poor. Through the party’s massive infrastructure and public employment programmes, accelerate the provision of electricity, water, sanitation and other services to those South Africans who still do not have them.

Education and skills for a changing world – Overcome the fundamental challenge of persistent inequality in all facets of our education system. Work harder to ensure that schools in townships and rural areas are better resourced, that all schools meet the basic infrastructure standards and that poor and middle class students receive the financial support they need to access and remain in tertiary education.

Prioritise the upskilling of educators and school management.

Safe and secure communities – Work towards greater police visibility, more effective training of police and the greater involvement of community policing and safety forums in fighting crime. Be at the forefront of the fight against Gender-Based Violence. Be more direct in our efforts to reduce alcohol and substance abuse, which are major contributing factors in the perpetration of violence. Restore the credibility and integrity of government.

Accelerate land redistribution and rural development – Land reform is central to meeting the aspirations of the Freedom Charter, and to redressing the wrongs of the past. Strengthen existing policies to ensure fair and equitable redistribution of land.

Focus on resolving security of tenure that affects millions of our people through the Upgrading of Land Tenure Rights Amendment Bill, as well as on speeding up the outstanding claims of labour tenants.

Forging ahead with the renewal of the ANC

The task of renewing the ANC is therefore not just a matter of organisational self-interest. Focus on the vital task of building the unity of purpose and unity in action. Strengthen the ANC’s Integrity Commission, to enable it to act decisively, without fear or favour, to deal with corruption and wrongdoing in our ranks.

The party will not tolerate members of the ANC who are involved in crooked practices like vote-buying, branch list manipulation to secure positions or extending patronage to get votes. It will not stand for any member of the ANC bringing our organisation into disrepute. Call on all ANC members to be mindful that they represent an organisation and not themselves.

A better world and a better Africa

The COVID-19 pandemic has disrupted global trade, investment, production and travel. Economies around the world have contracted and millions of jobs have been lost. South Africa has been instrumental in forging more effective collaboration among African countries in tackling the economic effects of COVID-19. The ANC and the government it leads will continue to advocate for equitable access to COVID-19 vaccines.

The ANC affirms its commitment to meeting the aspirations of the AU’s Agenda 2063 of an integrated, united, prosperous and peaceful continent. The ongoing conflicts in the Eastern DRC, Sahel region, Somalia, Ethiopia and northern Mozambique remain a major concern.

Silencing the guns on our continent will require commitment from all African leaders and the cooperation of the international community.

In advancing African unity and solidarity, the struggle of the Saharawi people for independence and self-determination should remain a priority for the continent. Reiterate our call for the lifting of unfair and punitive sanctions against Zimbabwe and Cuba. It necessary for Africa to focus on skills development and social support to its population Economic empowerment of women in Africa is critical not only to gender equality, but also to Africa’s overall economic development.

Ramaphosa concluded by announcing the theme for the ruling party in 2021, unity, renewal and reconstruction in the year of Charlotte Maxeke.

Political analyst, Sanusha Naidu, says the biggest challenge facing the ANC and its president is the implementation of the missions and goals outlined in the January 8 Statement.

Naidu says although the commitments look good on paper the true test is their implementation.

“Have we not heard this all before have we not heard the idea that we need to have a more effective a more capable a more ethical and a more developmental state that governance should actually be about being the servant of the people? I think the challenge for the president is what do you with implementation? How does this party now go on this path of renewal? And I think that’s the bigger colossal challenge your internal fragmentation and power battles and fractions. It either indicates two things: it either indicates that finally now the president has some leverages where he can push these guidelines forward or it suggests that they going to go back to the drawing board to try and perhaps create a more acceptable level of guidelines.”

Below is the full January 8th statement by ANC President Cyril Ramaphosa: