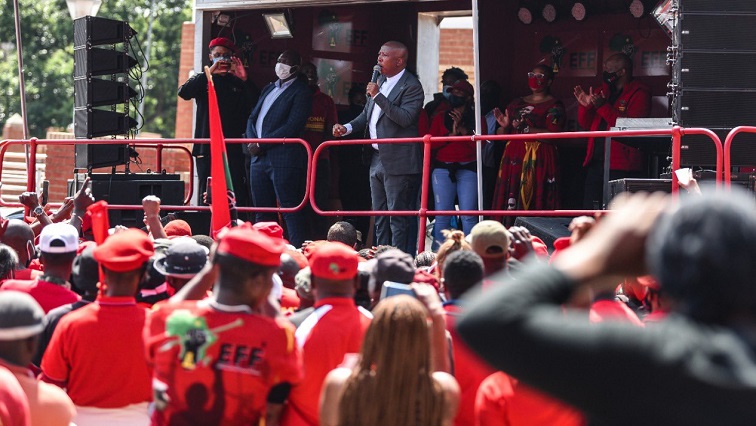 The case of assault against Economic Freedom Fighters (EFF) leader Julius Malema and MP Mbuyiseni Ndlozi has been postponed to the 28th of October for trial.

The Randburg Magistrates Court has ruled that the media will carry proceedings live on both TV and Radio, after an application was approved today.

There was an altercation inside the courtroom as some members of AfriForum refused to make way for the media houses that were there to listen to the proceedings.

Malema and some of the party’s top leadership tried to force the AfriForum members out of the court, but officials intervened and sorted the scuffle. Malema says there was no way they would allow Johannes Venter, the policeman who’s laid an assault charge against him and Ndlozi to testify without the presence of the media.

On Tuesday, Venter was scheduled to give evidence, regarding his alleged assault by Malema and Ndlozi at the funeral of the late struggle icon Winnie Madikizela-Mandela in 2018. But Malema wouldn’t have it.

“They must all be covered. We want to make them famous. Everybody must be covered here. It’s not only us who must be covered here. The magistrate can’t say, ‘no, today, we’re proceeding because it’s a White man who gives evidence without cameras’ and then when it is our turn and then she’s going to probably allow cameras participate inside. We are not going to do that. So we must all be treated the same here.”

Addressing EFF members outside of the Randburg Magistrates Court, Malema says Venter, must apologise to them for what happened during Winnie Madikizela-Mandela’s funeral in 2018. He says even the state owes them an apology because it was disrespectful for their name to be dragged in the mud. This, because they were all emotional as they had lost Mama Winnie. He says they deserve an apology.

Also present in court was the EFF top leadership, including National Chairperson, Veronica Mente, General Secretary Marshall Dlamini, and Deputy President Floyd Shivambu. They are now expected back on the 28th of this month.