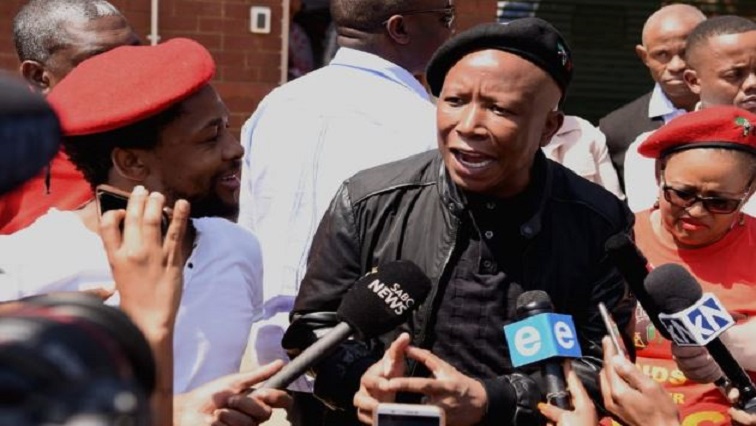 Economic Freedom Fighters (EFF) leader Julius Malema and the party’s MP Mbuyiseni Ndlozi will be back in the Randburg Magistrate’s Court in Johannesburg on Tuesday.

The two allegedly assaulted a policeman at the Fourways Memorial Park cemetery during the funeral of struggle stalwart Winnie Madikizela-Mandela in 2018.

Malema and Ndlozi will know today when their trial will resume.

The two have been vocal that they would not have been hindered by anyone from bidding farewell to struggle icon Winnie Madikizela-Mandela.

At the cemetery, they had an altercation with a policeman, who opened a charge of assault against them.

Some EFF members are expected to gather outside the Randburg Magistrate’s Court in support of the two party leaders.

Earlier, lobby group AfriForum claimed that after the senior policeman laid a charge, the case did not receive the necessary attention. The matter only received attention after the group’s private prosecution unit made inquiries.

AfriForum CEO Kallie Kriel says, “We are happy that the trial date has been set for the 10th of March. It brings clarity it also sends out a message to all South Africans that there is equality before the law. Unfortunately, sometimes you need pressure from organisations like AfriForum to get equality before the law. Unfortunately, this has taken 19 months despite the fact that we have video footage of the incident.

However, the NPA has downplayed AfriForum’s claims. NPA regional communications manager Phindi Louw-Mjonondwana says, “We have to come up clear as the NPA on this matter to say that the investigations into this matter had not concluded. There were still on-going investigations hence the matter could not be enrolled. Once the investigations were concluded, the NPA could place the matter on the roll. It is not a matter of it being placed on the roll because AfriForum has brought a complaint, that’s not how it works.”

The EFF leader says he will be happy to take the fall for fighting to witness the burial of Madikizela-Mandela. But has at the same time dismissed AfriForum’s intentions.

In September, the assault case was postponed to October 13.