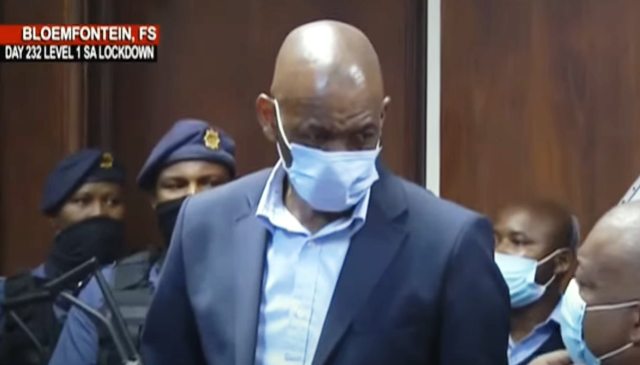 African National Congress (ANC) Secretary-General Ace Magashule has expressed gratitude for the support he received from his fellow leaders and members, following his first appearance at the Bloemfontein Magistrate’s court on Friday.

READ: @NPA_Prosecutes statement detailing the basis of the corruption, fraud and money-laundering case against #AceMagashule: pic.twitter.com/YnIunWOTgF

He has addressed a crowd of supporters after being granted bail.

Magashule’s supporters rally around him:

The court has acceded to the request of the prosecution that Magashule be ordered not to contact his former personal assistant, Moroadi Chalota, who is now a state witness. The state has submitted that Magashule has co-operated with the investigators and is not deemed a flight risk.

More suspects will be arrested before Magashule’s next court appearance

NPA spokesperson Sipho Ngwema says more suspects are to be arrested before Magashule’s next court appearance.

“We expect to add three more accused on the charge sheet before then and we are hoping that in February, we should be able to set a trial date which is going to take place at the high court. The investigations are done, we just need to add a few more people to the charge sheet and then we move forward we go to trial. The state is ready and we hope that things will be able to move fairly quickly given the fact that the accused now have the indictment with them, and when those three are added we should be able to start as soon as possible.”