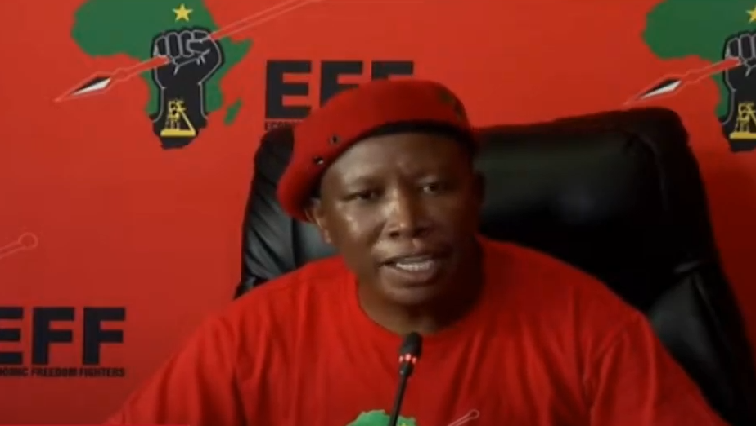 The Economic Freedom Fighters (EFF) have called for government to reinstate social relief measures to citizens as South Africa experiences a second wave of the COVID-19 pandemic.

While addressing a virtual media briefing, EFF leader Julius Malema says the measures must be reinstated, given that the lockdown will continue to affect the livelihood of many people.

The EFF has further called for government to compel all banks to give a six month payment holiday on repayment on mortgages, rents and loans.

“The EFF calls for the reinstatement of all social and economic relief measures to protect the livelihoods of small business and the poorest of the poor. This includes the extending of the COVID-19 grant beyond the current regime, which sees the last payment being made in January 2021. The government must ensure that they continue to provide relief to small businesses through the Unemployment Insurance Fund and TERS relief scheme. And any business owner that receives payment from government and does not pay employees must face harsh consequences.”

EFF says local government elections scheduled for later this year should be postponed until 2024 for fear of it becoming a super spreader event.

Malema says outside the dangers presented by the COVID-19 pandemic, it makes sense to hold local, provincial and national elections at the same time.

“South Africa lacks the technical capacity and moral integrity to attempt to run an election in any other way besides direct voting through ballot and the only sensible way without risking life and undermining democracy is in the merging of all elections into 2024. The Secretary General of the EFF will begin a process of engaging all political parties on this position and present to them the already concept document of consolidation of elections as the future of South Africa’s electoral system.”

EFF has condemned the closing of 20 local ports of entry as inhumane and reckless. The land borders between South Africa and her neighbours have been closed under the extended Level 3 lockdown restrictions announced earlier this week by President Cyril Ramaphosa. Malema says SADC leaders should have worked to introduce free testing and permits.

Malema has condemned the leadership of SADC for not having resolved matters relating to common protocols and procedures for travel including free testing and permits.

“It’s an act of classism and racism and the president of South Africa, who happens to chair the African Union, should not have said that South Africa is being closed for African people. It is ironic, as the coronavirus did not enter South Africa through Zimbabwe, Lesotho or Swaziland but came from Italy. It is a narrow quick-fix solution to a complex problem and will undermine the dignity of many people who have families and livelihoods in South Africa.”