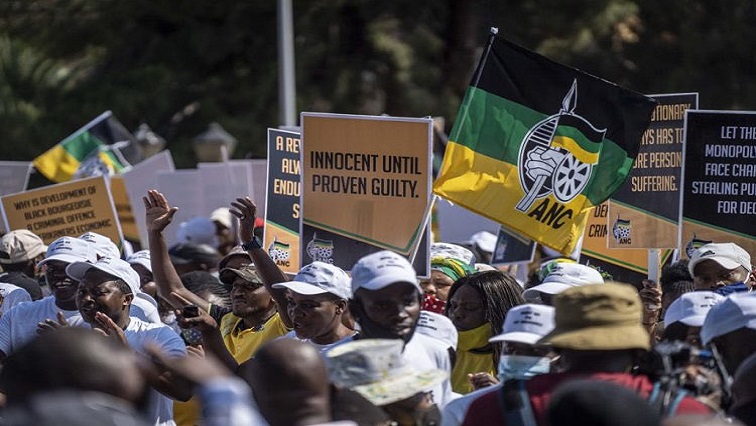 On Friday when Magashule appeared in the Bloemfontein Magistrate’s Court in the Free State, his supporters burnt ANC t-shirts bearing Ramaphosa’s face. They also called on the President to step down, saying Magashule deserved to be the head of state.

Some political analysts have been reading the situation to mean demand for the recall of Ramaphosa.

The #SG of @MYANC, comrade @Magashule_Ace, listen to the words, look at the massive crowd. A truly loyal, revolutionary, leader of @MYANC!

ANC Head of the Presidency Sibongile Besani says the party will not tolerate divisive behaviour.

Magashule faces charges of fraud and corruption related to an asbestos eradication contract in the Free State in 2014, when he was the Premier of the province.

He’s alleged to have benefited from the contract, which was tendered at R255-million but saw only R21-million used for the actual project.

Ahead of Magashule’s court appearance, the ANC said no members should attend the proceedings in any official party capacity, but rather as individuals and friends, should they want to show their support.  However, Magashule’s supporters openly defied this.

Some residents of Odendaalsrus in Free State say they are relieved following the high-profile arrests in the multimillion-rand asbestos corruption scandal. Magashule is the eighth person to be charged for the irregular awarding of the 2014 asbestos roofing audit tender.

The would-be beneficiaries of the tender say they’ve been living in appalling conditions for years.  Residents of the sprawling township of Kutlwanong, Odendaalsrus, say their health continues to deteriorate because of inhaling asbestos.

Some say they’ve lived in the asbestos-roofed houses for more than 50 years. One of them is 58-year-old Galeboe Sesana. He says, “My parents passed away but I’m still living in that house. But the house when I paint the paint falls. Even now I’m drinking TB tablets and I do want someone to help to overcome this.”

64-year-old Puleng Ntholi echoes the same sentiments. “This roof affects my health because I struggle to breathe properly. Also, the rain comes in because there is leakage on the roof.”