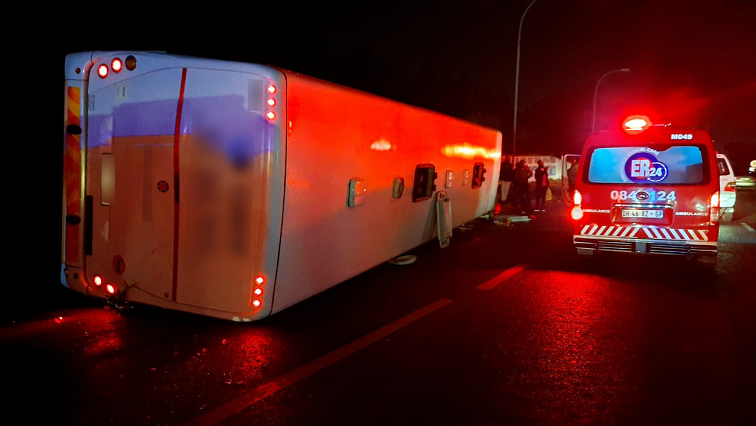 At least 20 people have been injured after the bus they were travelling in overturned on the corner of the Golden Highway and Columbine Avenue in Baragwanath, south of Johannesburg.

The injuries range from minor to serious.

Emergency services are currently on the scene to provide medical assistance to those who need it.

No fatalities have been reported.

The crash comes amid heavy downpours in Gauteng which will continue until at least 11pm on Monday evening.

Earlier, the Weather Service warned that the storm currently affecting large parts of the city, may result in localised flooding and even isolated incidents of large, damaging hail.

There have been reports of flooding on the N1 South at the Maraisburg off-ramp with traffic being badly affected.

JMPD Spokesperson, Wayne Minnaar, says motorists are advised to exercise extreme caution as a number of roads are flooded.

“Two lanes are closed to traffic on the M1 South and the M1 North in Newtown due to the freeway being flooded. Motorists are advised to drive with caution as officers are monitoring that situation. Klipspruit Valley Road in Orlando West, Soweto, is also flooded between Chris Hani Road and Moroko Nancefield road.”

Meanwhile, a man believed to be in his 30s has been struck and killed by lightning on a farm in Elandsfontein, south of Johannesburg.

The thunder showers caused flooding on some major roads.

ER24 Spokesperson, Russel Meiring, says the man was declared dead by paramedics when they arrived on the scene.

“Paramedics arrived on the scene at 04h55 to find the man lying motionless in the field, surrounded by a number of his colleagues. Medics assessed the man and found that he had shown no signs of life. Unfortunately, nothing could be done for him, and he was declared dead. Local authorities were on the scene for further investigations.”