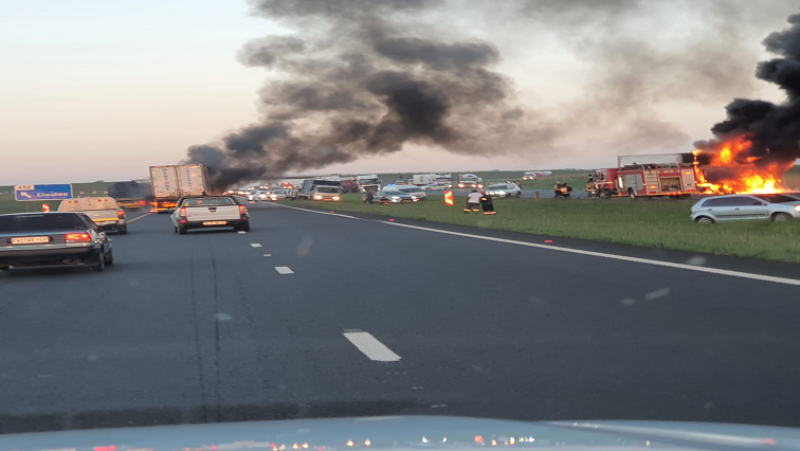 Transport Minister Fikile Mbalula says those found guilty of attacking truck drivers on the country’s roads will be charged with economic sabotage. He briefed the National Assembly on his department’s plans for enforcing road safety this festive season.

Dozens of freight vehicles were recently torched and vandalised as some protestors raised concerns about foreign nationals getting trucking jobs.

Mbalula says the attacks on truck drivers are a major source of concern.

Tjose “We remain seriously concerned at the escalation of attacks on truck drivers. Lawlessness will not be tolerated. We will leave no stone unturned to ensure those who believe they can destroy property face the full might of the law and they will be charged with economic sabotage.”

We remain seriously concerned at the escalation of attacks on trucks.

We will leave no stone unturned in ensuring that those who believe they have a right to place the lives of others at risk meet the full might of the law. pic.twitter.com/hmpH6KUklO

Member of Parliament,  the DA’s  Chris Hunsinger raised the issue.

“Our roads will be more dangerous in the coming days than ever before. We have seen an increase in truck drivers being targeted. But as yet there is no workable plan to ensure their safety.”

United Democratic Movement’s Nqaba Kwankwa also expressed concern over the violence.  “We condemn the violence; it can never be used as an excuse to achieve anything. But we should also hear the cries of our people, look into the enforcement of labour laws by the private sector because our people have been raising this.”

Meanwhile, Police Minister, Bheki Cele, has warned they could call in the army to assist police to put an end to the attacks.

Arrests have been made with regards to the violence :

Mbalula says all measures have been put in place to ensure that the transport industry including the taxi industry does not become a spreader of COVID-19.

“In keeping with our message of not allowing public transport to serve as a super spreader activity, our law enforcement officers at roadblocks will put measures in place to enforce the COVID-19 regulations and directions.”