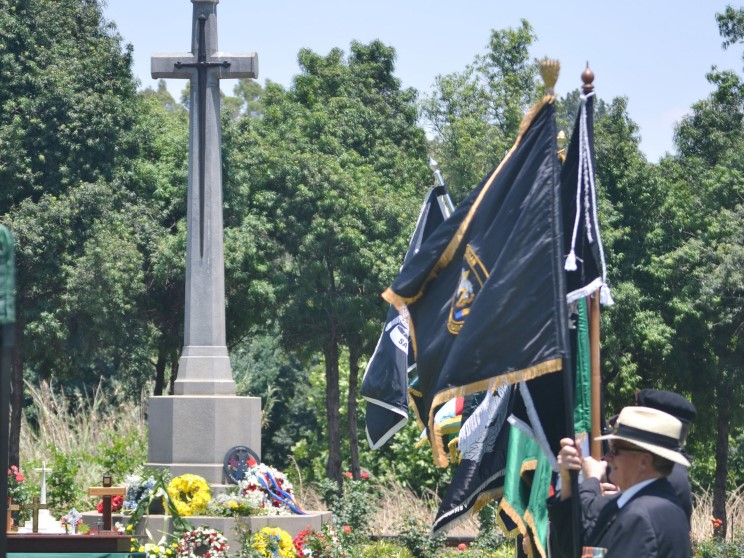 The COVID-19 pandemic has not prevented military veterans, family members and the public from paying tribute to the millions of soldiers who fought and died in service of their country during the annual memorial service at the Thaba Tshwane New Military Cemetery.

However, this year the service saw slight changes with no programmes, no hymns and no support from the South African National Defence Force who usually provide the band and sentries for the event.  The ceremony, which began with the lighting of a candle of remembrance for the unknown soldier, did feature the usual memorial service, wreath laying, two minute’s silence, Last Post and Reveille.

Commenting on the turnout at the service despite the pandemic, a visibly delighted Marina Valentine, the Chairperson of the Pretoria Memorial Services Council said: “I am blown away by the number of people who attended.  My invites went out late because of lockdown and we did not know what was going to happen.  I got replies somewhere in the 90s – I know for a fact we had 150 chairs.”

Charles Ross, Public Relations Officer for the South African Legion, said this is the first time he can remember the public attending a memorial service since February or March. He added: “Today was special – it is probably one of the biggest services we have had in Pretoria.  If I just look at the number of wreaths that were laid – not so much the people that attended – and the number of organisations that were here.  I didn’t count them, but I reckon it must be close to 50 if not more.  It is encouraging, people are accepting the day and are joining in to remember the fallen.”

The Thaba Tshwane New Military Cemetery contains 293 Commonwealth graves – 272 South Africans, 21 from the United Kingdom, one Greek, one Belgian and one non-war grave.   It is maintained by the South African branch of the commonwealth war graves commission.  It was established in 1917 and is currently responsible for maintaining Commonwealth War Graves in 123 countries.

Services have also been held in Johannesburg, Durban and Cape Town and at various schools across the country such as Springs Boys High School in Gauteng and Glenwood High School in Durban. Jeppe High School for Boys will hold a virtual service on November 11.

Valentine summed up the meaning of Remembrance Day with a quote about the poppy, the enduring symbol of remembrance for those who have paid the ultimate price in conflicts around the world: “So remember every November, when we hold our Remembrance Day, of the lads who lie beneath the poppy and the price they had to pay.”