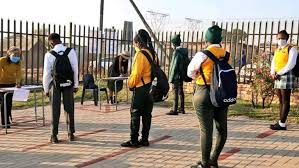 The rotation system that is currently being adopted for students has placed more pressure on teachers and schools are battling to cope, according to National Teachers Union (NATU).

Since schools resumed last month, learners have been divided into groups that attend on different days. Some attend classes for two days in the week and others thrice a week.

The measures have been introduced to comply with COVID-19 protocols.

NATU says the situation is so bad that principals are forcing sick teachers to return to school.

Union president, Allan Thompson, says the rotation system will also result in teachers not covering all of the syllabus.

” The Department promised to employ substitute educators but there are no substitute educators that are employed that are coming to school, we have seen teachers who are having very serious comorbidities being compelled to by their principals. Some have already started reporting for duties but we are worried that those people are likely to die in the working environment.”

Meanwhile, this week Basic Education Minister Angie Motshekga announced that she has approached National Treasury for money to pay for the 22 000 substitute teachers required nationwide.

National Professional Teacher’s Organisation of South Africa (Naptosa) President, Basil Manuel, says they raised the matter in May already and does not understand why the national Department didn’t approach Treasury sooner.

“So we are very concerned about the Minister’s statement what makes one particularly unhappy is that the Department has had three months to do this, the agreement was signed on the 30th of May and we are now in September, three months later after promising these people would be appointed now they are saying they are looking for money. What have they been doing for 3 months? At the same time, we see that schools are really battling..”

Unions say that schools are filling the gaps by making teachers available to teach subjects that they’re not familiar with.

They say some learners are left without teachers, including those in matric that will be writing their final exams soon.

The Department of Education in Gauteng says it has given approval for over 4 500 teachers to work from home due to comorbidities. The Department says schools have been getting stand-in teachers from their database and so far that process has been smooth.

Spokesperson, Steve Mabona, says the stay-at-home teachers have been roped in to record lessons from home and to mark school-work.

“We have enough educators so when there is a need we go into the database, and make sure that we get the necessary profile of what is needed at the school and that post will go at school level they will conduct necessary recruitment processes and a replacement will then be appointed.”