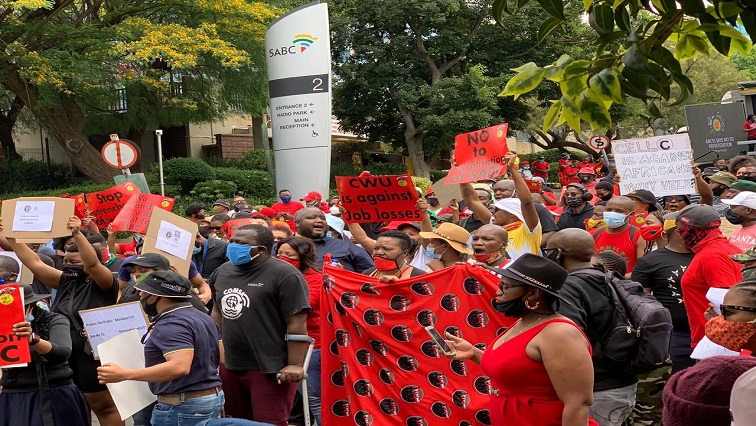 The SABC says it has responded to the Communication Workers Union’s (CWU) memorandum of demands.

The public broadcaster however says it will not divulge the details of its response until the union has communicated the message to its members.

The CWU had given SABC management until noon on Monday to respond to its demands or face intensified strike action. The union wants an immediate end to the planned retrenchment of as many as 400 permanent staff and the withdrawal of redundancy letters that have already been issued to some workers.

It has also called for the board to be dissolved and for the SABC to be placed under administration. Gugu Ntuli is the SABC’s Group Executive for Corporate Affairs and Marketing.

“The SABC can confirm that it has responded to CWU’s memorandum. The cooperation will however allow CWU to communicate and engage its members first, before we can actually share the details of our response.”

Judgment in the SABC case brought by union BEMAWU will be handed down on Wednesday..

BEMAWU legal representative, Senior Counsel Omphemetse Mooki asked the Labour Court in Johannesburg to grant an order for the SABC to withdraw redundancy letters and engage in a fair process.

He challenged the SABC to produce evidence that it consulted with unions on the selection criteria for the new structure as well as the decision on severance packages.

Advocate Mooki argued that the SABC had failed to engage in a fair consultation before issuing the letters.

“So the issues my lord are pressing. It’s not only a matter that we don’t know why we are here because we’ve given you an undertaking the SABC is not good on their word. We would ask my lord that the court grant an order obliging the SABC to engage in a fair procedure, and secondly an order that the termination letters be withdrawn.”

He has argued that the application for an interdict to stop retrenchments at the SABC is in fact an urgent matter.

Mooki says the urgency is created by the termination letters which the SABC has issued before the conclusion of consultation processes with unions.

He says the SABC also demonstrated inconsistency when it presented two different structures in two consultation meetings held in October.

Mooki says the SABC has been acting in bad faith.

“There was another consultation process on that day the SABC presented another structure which it was proposing. When the parties met on the 16th they get presented with a completely different structure later. That is not consultation my lord.”