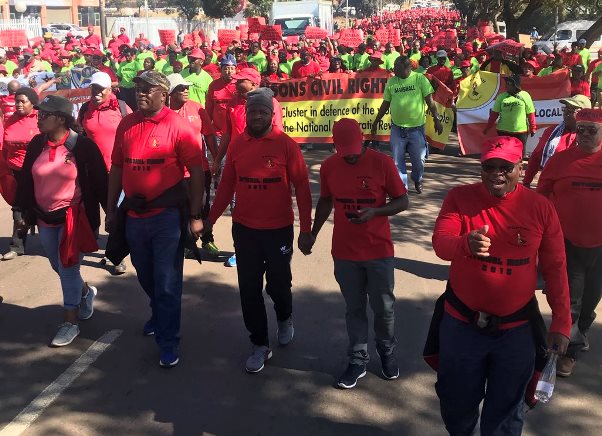 The Police and Prisons Civil Rights Union (POPCRU) supports the Congress of South African Trade Unions (COSATU) National Day of Action which will take place on October 7th in defence of collective bargaining, corruption, job losses and Gender-Based Violence (GBV) among others.
In a statement, Popcru has encourages its members, who will be off-duty on the day, to join the National Day of Action, where memorandums will be delivered.
“Many of our members within the Criminal Justice Cluster continue to be faced by numerous, long-standing challenges that have been ignored over the years, and despite our successes in certain areas, a lot still needs to be done in improving our conditions, and the actions to be taken in the next week are but part of the broader challenges intrinsically linked to our specific departmental challenges,” the Popcru statement reads.
Popcru says workers in the Criminal Justice Cluster, as well as others within the broader public sector have not been paid their salary adjustment since 1 April this year to date.
“With over 25 000 COVID-19 infections and 350 deaths within the Criminal Justice Cluster (CJC) thus far, the pandemic has brought to the open the reality that our members, who continue to be in the frontline, continue to face unfair and unjust working conditions in the face of their indifferent superiors who have not taken to cognisance their safety measures while conducting their duties,” further reads.
Cosatu’s National Day of Action

Meanwhile, Cosatu says the new unemployment numbers have given them more reason to continue with their planned march next week.

The union believes unemployment will get worse because of an increase in the number of section 189 applications expressing companies’ intentions to retrench.

On Tuesday, Statistics South Africa reported that according to the expanded definition of the unemployment rate,  the number of people without jobs has increased by 2.3% to 42% in the second quarter compared to the first quarter of 2020.

However, the official unemployment rate decreased to 23.3% in the second quarter from 30.1% in the first quarter of the year because people stopped looking for jobs during the lockdown.

Cosatu’s spokesperson Sizwe Pamla says, “These numbers are proof that the working class is under siege. So we are going on strike on October 7. The fact that we see a rise in unemployment, the fact that the economy is declining at a rate that it is.”

“It is also a fact that 10% of our budget is linked to corruption according to the Auditor-General. If we don’t tackle issues of corruption which are suffocating this economy, the situation is only going to get worse from here.  So we are urging all workers to draw their names from here.”