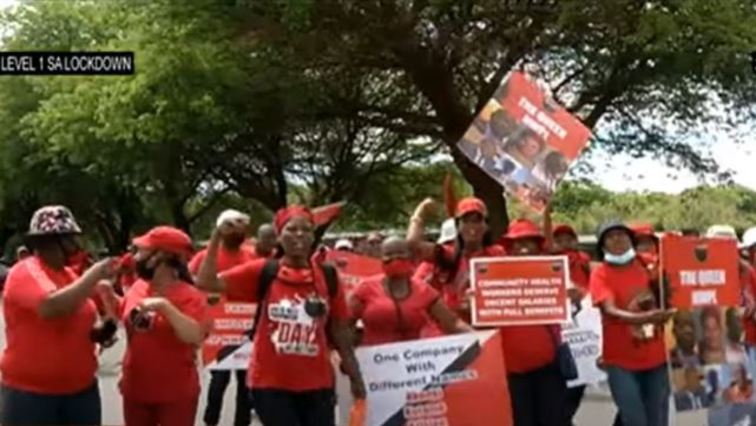 There is still no end in sight for two National Education, Health and Allied Workers’ Union (NEHAWU) led strikes in the North West.

Community health workers and staff at the provincial legislature have been on strike for three weeks. They gathered in Mahikeng on Friday for a mass protest.

Some clinics have been closed, leaving patients stranded. This as community health workers downed tools demanding to be permanently employed by the health department.

NEHAWU members at the North West legislature down tools

Workers there are demanding that the process stops with immediate effect.

“My post has been downgraded to C2 which is 228, my counterpart in the National Assembly, she is earning R1.6 million and we are doing the very same job,” says a worker.

“We want to be appointed permanently. Where is our budget,  it has been for many years with such a low salary, enough is enough,” says another worker.

Although talks are continuing – there is seemingly no end in sight to the strike.

“We don’t have any agreement with the management or whatsoever, so the deadlock remains and we continue,” says NEHAWU Provincial Secretary Patrick Makhafane.

Government has committed to engage with the union and it remains to be seen if the strike action will continue next week.

NEHAWU members in the North West Legislature upset with the ANC: