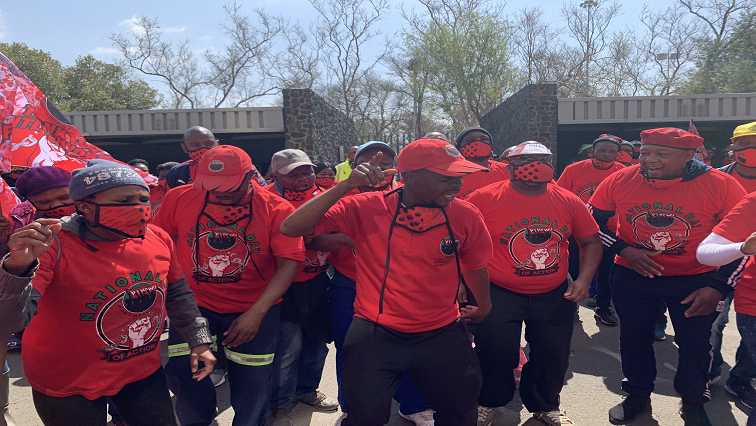 The National Education, Health and Allied Workers’ Union (NEHAWU) members in the Free State say they will leave no stone unturned to root out corruption.

Members have joined the national strike to address issues faced in the health care sector.

The union is also concerned about its frontline members who do not have adequate Personal Protective Equipment (PPE) as they help fight the COVID-19 pandemic.

NC Nehawu members are threatening to withdraw their labour if their demands are not met in the next five days….#SABCNews pic.twitter.com/1qwYMGV5Qb

A memorandum of demand has been handed over to the office of the premier.

Singing and chanting in solidarity – NEHAWU members say the health department should address the issues faced by frontline workers.

The province had seen a series of protests by health care workers over insufficient personal protective equipment.

NEHAWU threatens to withdraw its members from the frontlines:

The Psychiatric Hospital in Bloemfontein has more than 90-workers who tested positive for COVID-19.

Workers say government should speed up the process of employing contract base health care workers.

Some frustrated workers had this to say:

“There are severe shortages and PPEs are not even available and management does not care about that.”

“The issue of shortage of staff is very much critical in terms of critical skills where the employer is not employing more advanced life support.”

Young Communist League of South Africa is in support of the strike.

NEHAWU provincial chairperson, Moeketsi Napo, says government should prioritise health care workers who have been in the forefront of fighting COVID-19.

“We are saying there’s a lack of PPE for frontline workers. As a result, some of the frontline workers have succumbed due to COVID-19. So we are demanding that government must ensure that they provide enough PPEs. And at the same time, we are saying the PPE procurement must be centralised and not decentralised because there is a lot of corruption due to decentralisation.”

NEHAWU adds that the poor infrastructure at public health care facilities should be improved.

Joint NEHAWU briefing on programme of action to protect workers from COVID-19: