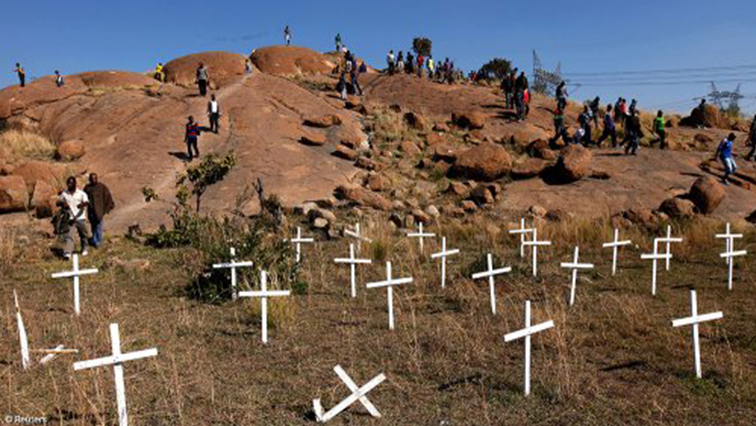 The Sinethemba Women’s Organisation from Marikana near Rustenburg in the North West says it is disappointed that its members were not allowed to go to the Koppie where 34 mineworkers were killed.

The women had hoped to be part of a wreath-laying ceremony that the Association of Mineworkers and Construction Union (AMCU) had organised on Sunday, but were told that they would exceed the number allowed for public gatherings during the lockdown.

Earlier in the day, members of the organisation had taken part in a demonstration in support of the widows of mineworkers who were killed by police on August 16, 2012.

Sinethemba chairperson Thumeka Magwangqana says, “We did not go to the Koppie because we did not get permission to do so. So we are very hurt but maybe one day it will be corrected.”

AMCU Rustenburg Regional Chairperson for Health and Safety, Molete Thoane, says they had no choice but to hold the commemoration outside Marikana.

“The decision was taken in respect of the protocol that has been put in place, because this tragedy has affected a lot of people. If we held the event, it would’ve attracted masses. And we don’t want to be viewed as being against the rules of the state.”

Some mineworkers who came to pay their respects say they are not happy that this year’s commemoration was held in Johannesburg.

“The commemoration is usually hosted here for the past seven years so that the people here could try to heal emotionally. So it is like an emotional suicide to take the commemoration back to Joburg whereas it has happened here,” says a mineworker.

“We are here to ask that this day should not end, it should continue for many years to come so that our children could see what happened here,” says another mineworker.

Residents say eight years after the killings, there’s no justice for the families of the slain mineworkers and no development in the area.

They have also expressed that they want the place where the 34 mineworkers were shot and killed to be marked as a heritage site.

Mineworkers were shot by police during an unprotected wage strike, where they were demanding that their salaries be increased to R12 500 a month.

This year was the first time that the Marikana massacre was commemorated outside Marikana.

Today marks 8 years since the #MarikanaMassacre . We salute and remember the lives of those who paid the ultimate sacrifice for a decent living wage in South African mines. May their souls continue to Rise In Power (RIP). Aluta Continua