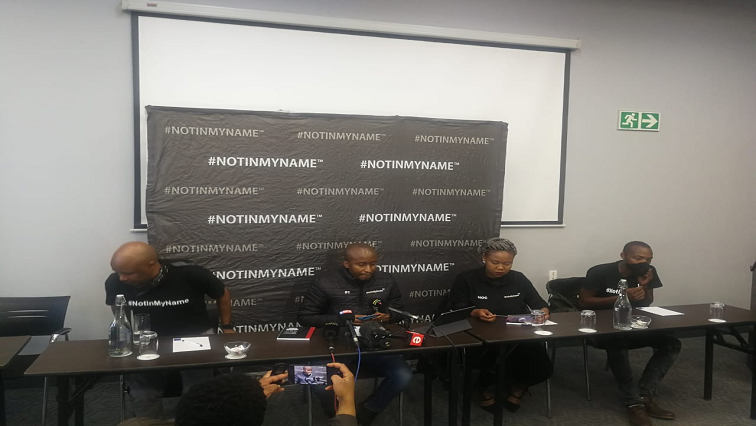 The advocacy group #NotInMyNameInternational says law enforcement officers must be trained to be able to deal with public disorder, gender-based violence and femicide. The group briefed the media in Pretoria on Thursday.

#NotInMyNameInternational also weighed in regarding the situation at the South African Football Association (SAFA).

The briefing comes in the wake of Independent Police Investigations Directorate’s (IPID) prosecution of three police officers implicated in the recent killing of 16-year-old Nathaniel Julies in Eldorado Park south of Johannesburg. #NotInMyNameInternational says SAPS officers are not well-versed with the Domestic Violence Act.

“@SAPoliceService should be trained on how to deal with people with special needs” – @NotInMyNameINT@LivePretoria pic.twitter.com/tc6H5z0kdb

#NotInMyNameInternational head of communications Mo Senne says, “SAPS is not compliant to the domestic violence act. 69% of detectives and 72% of visible policing did not attend the training that is within their own basic skills curriculum and on top of 193 000 officers that we have, we are short of 60 000. This means instead of international ratio of one officer per 282 people, it’s one officer per 383 people. So they are not capacitated and they are also short in capacity.”

#NotInMyNameInternational decries treatment they received during their protest outside the Zimbabwean embassy earlier this year. They allege that they were roughed up, assaulted and some of their members arrested. It also says disciplinary hearings against officers are far and few between.

In the video below, Not in My Name group protest outside the Zimbabwe Embassy in SA:

“Perpetrators in blue must start being arrested. They arrest others, they must also be arrested if they are found to be in the wrong. So we want to see the police who are busy killing civilians, we want to see them wearing orange overalls. In fact, we are at a point where in South Africa as civil society, we should even say that should these killings continue even their political heads themselves must be arrested because you cannot continue to lead government departments that are busy killing honest unarmed civilians.”

The advocacy group is calling on Sport, Arts and Culture Minister Nathi Mthethwa to intervene at the South African Football Association-SAFA. The advocacy group says their call is prompted by allegations of improper governance and rape allegations, levelled against SAFA president Dr Danny Jordan.

They say dismissal of Ria Ledwaba from SAFA is an indication of decay within the football controlling body’s higher structure. Ledwaba was booted from SAFA after she penned a letter to Mthethwa decrying Jordan’s administration.

Pressure mounts for SAFA president Danny Jordaan to step down:

“Of importance to us at this moment is specifically the issue around the rape case that we all knew about but suddenly it disappeared and we are not sure what happened there. So what we want to see be happening at SAFA, we want, one, minister Nathi Mthethwa of Sport Arts and Culture, must intervene. Secondly, there must be an internal investigation. So we’re calling for an external agency to investigate the internal issues of SAFA.”

Meanwhile, #NotInMyNameInternational announced that it is taking legal action against SAPS regarding treatment meted out to it during their protest outside Zimbabwean embassy.