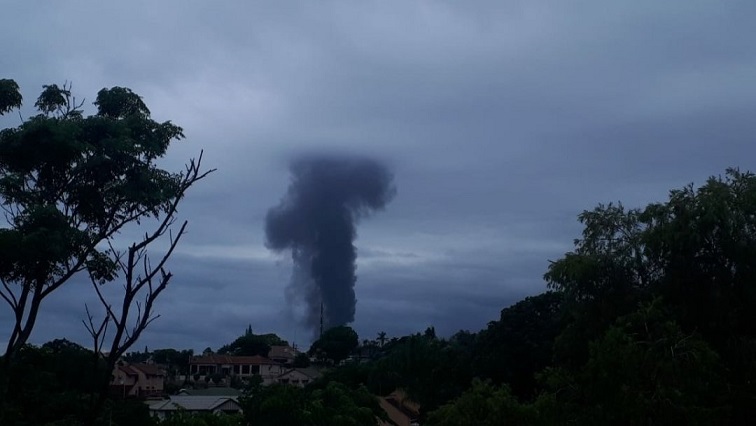 Workers from the Engen Oil Refinery at Wentworth south of Durban which suffered an explosion on Friday morning are being evacuated.

At this stage, the reason for the fire is not yet known.

It is believed that the explosion took place just after 7:00 am.

Advanced Life Support Paramedic Garrith Jamieson who is at the scene says the workers will be assessed by various medical teams on site.

Jamieson describes the thick, black smoke that continues to emerge from the fire.

“As you can see there is still a large cloud of black smoke. All the workers are being taken up to a facility further up the road where they will be assessed by medical personnel and those that need to go to hospital will be transported through to hospital. Tara Road has been closed by Metro Police as a precaution and as you can see smoke is billowing from the top.”

An eye witness describes what happened.

“The explosion was so loud that it shook the ground and we all ran out of our homes. Right now, there is black smoke in the sky and there is a huge fire at the refinery. It’s an area that you can’t go near because of the fire.”

In the tweet below, residents in surrounding areas have started evacuating their homes:

Residents at Flat 10 on Beach Road Flat opposite the Engen Refinery have started vacating their homes. Video supplied by neighbours. #sabcnews pic.twitter.com/tQW5NOMhWh

Jamieson says all relevant authorities are on the scene.

“Multiple ambulances together with multiple rescues, SAPS and police search and rescue are in attendance. All necessary authorities are here. At this stage, there has been a staging area set up where the ambulances are parked. Multiple patients are currently being assessed and will then determine patients going through to hospital.”

The video below is an interview with Garrith Jamieson: