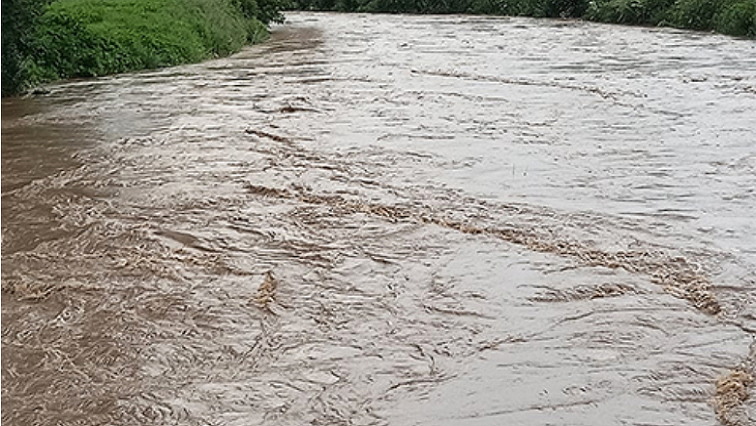 As heavy rains continue to fall in some parts of KwaZulu-Natal the community of Zwelisha outside the Midlands town of Estcourt has been cut off from the outside world due to floods. The low level bridge on the gravel road that connects Zwelisha with the road to Estcourt is still flooded and people continue to risk their lives by wading through the flood water.

The death of a loved one at home, coupled with anxiety about how her body is to be transported to a funeral parlour due to heavy rains have left the Hadebe family from Zwelisha devastated. When a relative died on New Year’s Day, the family had to watch undertakers collect the body from the village and carry it through the waters raging over the flooded low level bridge on the road to town.

The undertakers had no choice but to cross the flooded river on foot in the same way many community members are forced to do. Onlookers watched in horror and with bated breath, praying that they make it to the other end. Some community members extended a helping hand, passing the corpse from one to another across the river, while others just stared.

Family member, Sabelo Nyathi, says they don’t know how the remains of their departed loved one will be brought home to be buried.

“It was very painful however were forced by the situation we found ourselves in, although we were extremely scared of water we had to carry the body across the river to be taken to the funeral parlour. We could not keep the body of the deceased at home while we are busy planning funeral, we appeal to government to assist us and fix the road even now we are not sure how will the body return home for burial.”

The delay in the erection of a new, higher bridge is linked to budget constraints. Ward councillor Thokozani Dubazana – who also assisted in carrying the body over the river – says the contractor is now on site.

“The community had a problem to cross the river due to heavy rains, currently there is a bridge under construction, this area is a detour where community is crossing but heavy rains made it impossible for anyone to be able to cross freely, this also affected the family of the deceased the body had to be carried through the river. The project has been under way for five years and we encountered the challenge of budget to construct the bridge as we speak now the contractor is on site working on building the bridge,” explains Dubazana.

The Sibiya funeral parlour says the incident has left them traumatised. Sibiya Funerals manager, Mondli Madinane, says undertakers are inundated and under pressure to cope with the high number of burials they have to perform daily due to deaths from COVID-19.

“We were supposed to cross the bridge to fetch the body to take our vehicle and it was so sad. It was so said; it was terrible and we were so scared to do that but we had to do it because we are at work. And we also need to help the family. It’s very sensitive because we are the ones who have to take those bodies and we are not sure if it’s COVID or not. But we have to fetch those bodies and when we arrive at the mortuary no one is testing for positive or negative.”

The Hadebe family is praying for a dry spell so that the flood water will subside and allow them to bury their loved one soon.

And while the Zwelisha community waits for the bridge – their only hope is that it will be soon – before the water claims a life.

Nokuphiwa Mlangeni had to be helped by a man and a woman to cross the flooded drift because there is nothing people can hold on to should they lose their footing. Even then it was clear that the current was almost too strong for her.

“I was extremely scared of water and also as you are walking in water the stones are slippery it is very dangerous. I appeal to government to fast track building the bridge for the community so they can also walk freely because crossing the river might result into other people being injured,” she says.