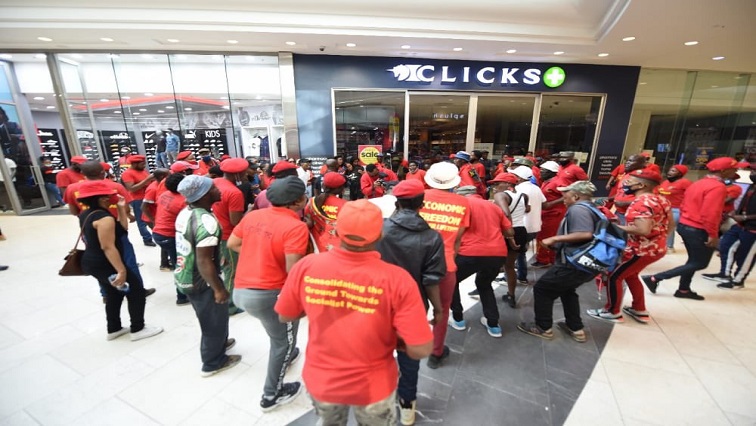 Gauteng police have arrested five suspects in connection with vandalism at a Clicks store in Alberton east of Johannesburg.

It is alleged the group vandalised the store at the Lemon Tree Shopping Centre during protests on Monday against a controversial hair advertisement.

It is reported that employees had locked themselves inside the store after receiving a warning of the planned EFF protest.

The suspects allegedly smashed and broke down the windows and the door, forcing entry into the store where they caused further damage including a fire that was swiftly contained.

The suspects are charged with malicious damage to property and will appear in court soon.

In a separate incident, a case of malicious damage to property has been opened after a group of people also on Monday allegedly stormed the Clicks Store in Bryanston.

Meanwhile, the party says its protest against Clicks will continue until Friday despite the High Court in Johannesburg interdicting party supporters from intimidating staff and customers.

On Tuesday, Clicks won an interim interdict against the members of the EFF from intimidating and threatening Clicks employees and customers as well as inciting violence against the company’s commercial operations.

#BREAKING @Clicks_SA has won with an Interim Order against them @EFFSouthAfrica on the Intimidation of employees and inciting violence against commercial operations of the company. #sabcnews pic.twitter.com/Yo2kEx5Ord

Below is the EFF’s acknowledgment of the court ruling: