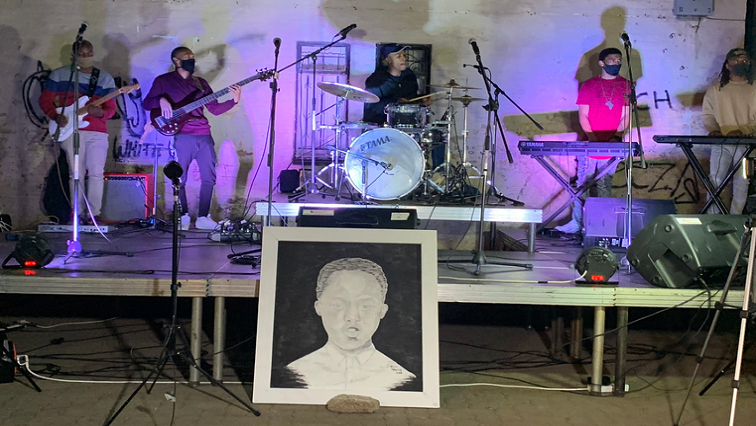 A memorial service has been held for Nathaniel Julies in Eldorado Park, south of Johannesburg. 16-year-old Julies was shot dead allegedly by the police on Wednesday last week.

The killing of the teenager sparked unrest in the community with residents calling for justice for Julies, who had Down Syndrome.

Thursday’s memorial service took place on the day that a third suspect appeared in the Protea Magistrates Court in connection with the murder of Julies.

The suspect joins two other Eldorado Park police officers that have been arrested and charged with the murder. The trio is due to appear in court again on Thursday next week.

In the video below, On Monday, two police officers appeared before Protea Magistrate’s Court on murder charges:

The Eldorado Park community was in a sombre mood, still reeling over the death of Julies. Residents gathered in the local Square to remember the teenager.

In front of the seated crowd laid a drawing of the 16-year-old. Julies, known as Loki, in the community, was fondly remembered by residents. Those close to him used the night to relay their memories of him.

Community member, Astrid Harrison says that Julies’ death is a big loss for the community.

“All of us here, all over the world as well have become poorer because an innocent has been taken away from us. Nathaniel managed to do one thing that so many have refused or was unable to do, he brought us all together as a coloured community. Nathaniel absolutely loved to dance, that was his thing he just loved to dance and he didn’t even need music, so if he wanted to dance he’d just whip out a dance and do it.”

Bishop Marcus Jacobs has called for a change in the community after Julies’ passing. Jacobs says the use of drugs in the area poses a threat to the safety of children.

‘I am from a powerful race’

Julies’ killing has thrust the plight of marginalised communities into the spotlight. In remembering Julies, Grade 11 learner, Candice Khumalo called for equality in these communities.

The call from the community is the same, an end to police brutality and for the protection of children in the community.

The community say it’s time for them to stand together. They also say they came in their numbers to support the family and to send the message to the perpetrators and the police that as a community they will not stand for police brutality and they stand together with the coloured community and with Eldorado park in fighting for justice for Nathaniel.

Community member, Aphile Carter, has praised Eldorado residents for uniting to demand justice after the killing of Julies.

“I feel like it’s the duty of the community to stand together in times like these. So we came here in numbers to support the family and to send the message to the perpetrators and the police that we as a community will not stand for police brutality and we stand together with the coloured community and with Eldorado park in fighting for justice for Nathaniel.”

Julies will be laid to rest on Saturday.

In the video below, Julies’ family is being interviewed: