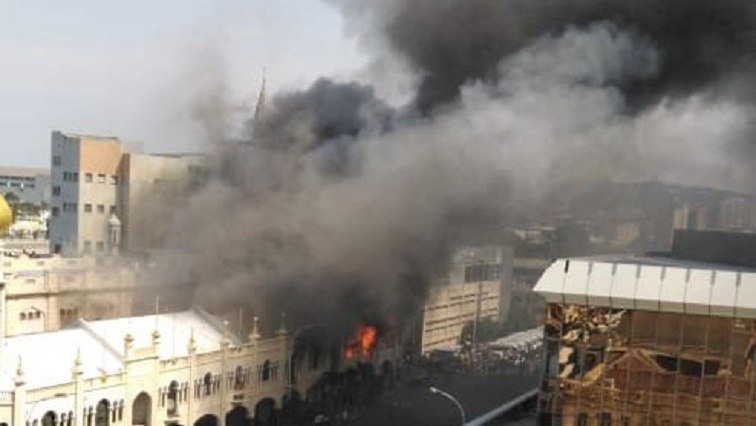 Fourteen tenants at the Juma Mosque building in the Durban CBD have escaped unharmed after a fire broke out in one of the flats that is used by people who work at the mosque.

It has now been confirmed that the fire has not affected the Juma Mosque itself- formerly known as the Grey Street Mosque- that is situated behind the block of flats. The extent of the damage has not yet been established.

Businesses in the building that caught fire were immediately closed for safety reasons. The movement of people near the scene had to be restricted as firefighters extinguished the blaze.

While initial reports from the scene indicated that it was the mosque itself that had caught alight, updates confirmed that the religious space had escaped the fire that was limited to the block of flats. AK Moola is among the tenants who narrowly escaped the fire. He says he was helped by Metro Police who came to evacuate them. But he says he lost everything including his pension money that was inside his flat.

“I saw the smoke came out, so Metro Police came out and said everyone must come out, everyone. But we are all Ok and very lucky. I lost the furniture there and I have a gym there. My wife had cash there and everything there,” says one tenant.

Ihsaan Khan is another tenant who narrowly escaped the blaze.

“I was busy taking a shower in my bathroom and I heard my child crying and screaming talking to me but I couldn’t hear what she was saying. The maid came and said see the fire and smoke. The maid told me to come out of the building as I was taking a shower. I had nothing to do but to put a towel around me and ran out of my house. All my belongings and all that I had, all gone. I have nothing, the goods that I sell at the market and over R40 000 cash, just over R40 000.”

Speaking to SABC News at the scene, a senior official of the Juma Mosque says it is difficult to estimate the extent of the damage at this stage. He says it is believed that the fire started in a single flat and spread to others rapidly.

“The fire started in flat number three and it then rapidly moved to the other flats and the Fire Department are here all I need to say is that there is no casualty on hand the mosque is not damaged in any way thanks to Allah the mighty God for that and the shops that are below the flats have not been damaged other than that there could be water damage as well.”

Meanwhile, chairperson Advocate Ahmed Mohammed says the mosque is not yet open to congregants, because it is observing lockdown regulations. He explains the legacy of the mosque that was built in 1881.

“It’s been the largest mosque in the Southern Hemisphere with more than a 100 years with a capacity of seven thousand members of the congregation and we have been observing the COVID-19 lockdown since March so we have not yet opened the mosque for any of the congregation. We have been observing that very strictly, we have to thank the All-Mighty it been contained as you can see.”

Emergency services and firefighters worked hard to extinguish the fire. KwaZulu-Natal Emergency Medical Services’ Robert McKenzie has confirmed that there were no casualties.