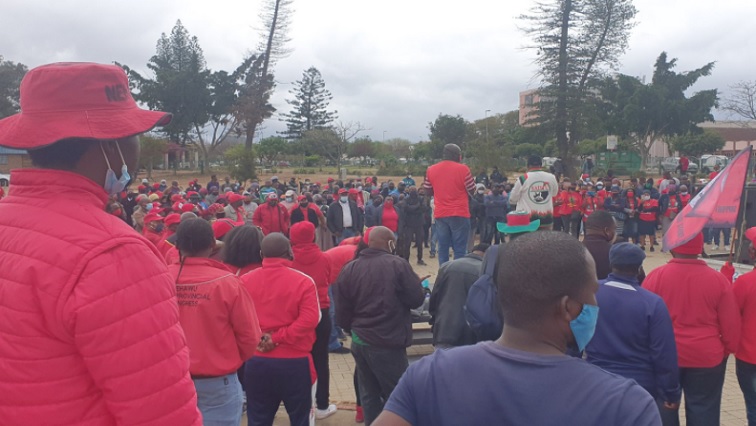 The Congress of South African Trade Unions (Cosatu) and other affiliates have refused to hand over a memorandum of their grievances to Limpopo Treasury MEC Seaparo Sekoati at the office of the Premier in Polokwane today. Sekoati was there to receive the memorandum on behalf of Premier Stan Mathabatha.

The union instead handed over the memorandum to the Labour Department.

Sekoati was meant to receive the memorandum outlining grievances raised by Cosatu and others. The unions, however, decided on the spot not to hand it over to him.

Sekoati says the provincial government will be unable to respond as it has not been given the memorandum.

“At the moment, we have not received any issues from Cosatu. If there are any matters that Cosatu would like to raise with government, they came here to bring us a memorandum as government, we were going to be in a better position to respond to the issues. Standing here right now, I don’t know the issues that are contained in the memorandum, but right now, we do not have any issues that we can respond to.”

Cosatu and its affiliates joined forces to take part in a one-day nationwide protest against corruption and ongoing wage disputes. Other issues the unions highlighted in the march include gender-based violence and poverty.

Cosatu Secretary-General Bheki Ntshalintshali, who joined the protest in Polokwane, says the march is a direct consequence of a failed economy.

“This economy is collapsing, so we need to take action. We know it is a very painful action to take. Workers are losing their money but we think it is an action necessary so that everybody can start to talk about it when they talk about the economy today.  They must not just stop there and say it is bad, the economy, but why workers are doing this and we think they will understand.”

Workers have demanded the resignation of Premier Stan Mathabtha after he did not step out to meet the workers.

Deputy Secretary-General of the National Union of Mineworkers, William Mabapa, has accused the premier of not taking measures against alleged looters of state funds.

“We are saying that the premier must resign because as Cosatu we have lost confidence in the premier, that is why he can’t come here. Why is he afraid of us? If he is bold and not protecting corruption, he was supposed to come here, confront us and tell us and confirm with us what he is going to do with the corruption that is in the province. So, we are sick and tired of Mathabatha. He must just go.”

Mabapa commends unions for putting for their differences aside and coming together for the march:

Cosatu says it is satisfied with the turnout. The protest did not affect the running of businesses in Polokwane. Marches were also conducted across four other districts in the province.