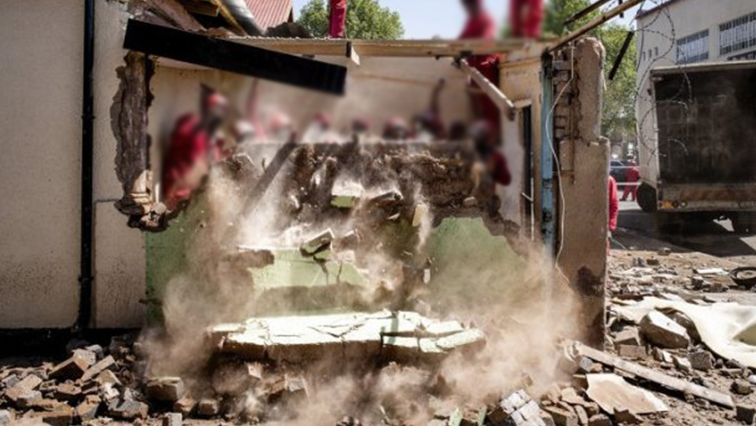 The City of Johannesburg has demolished an extension to a house belonging to the Khoza family in Klipspruit, Soweto after it was earmarked by the City along with other structures in the area for demolition after a mini-substation exploded.

Last month, the High Court in Johannesburg granted the City the go-ahead to demolish the house after the family lost an appeal against the demolition.

The City along with Eskom embarked on a project to install electricity, however, the house was allegedly in the way of Eskom trucks which meant they could not mount transmitters on street poles.

City of Joburg’s Housing MMC Mlungisi Mabaso says, “We are going to start the process to demolish but we will engage with stakeholders in the area first, the regulations on Level 2 still does not allow us to demolish or evict unless you are responding to an invasion.”

On Friday three rooms were bulldozed. The family says at about 11am a man who introduced himself as a sheriff, gave them a few minutes to salvage their belongings before commencing with demolishing part of the house.

Baanetse Khoza says, “He was like I’ll give you a few minutes, didn’t even give them more than 5 minutes then he demolished, started with the shack that was there and then the gate. Luckily some people in the neighbourhood and my friends were around so they came to help move things so they just demolished. Ja, it was just a party cos the people in the neighbourhood were celebrating, they were so happy.”

Residents in the area have been without electricity since July last year.

The City obtained an interdict to demolish the home in March, but an appeal process led to the issue only being resolved in the courts two weeks ago. When the family lost the appeal, their lawyers decided to take the matter to the Supreme Court of Appeal. However, that plan has now been put on ice.

The family’s attorney, Lawyers for Black People’s Zuko Madikane, says they are abandoning the Supreme Court of Appeal action and will now embark on a process to rescind the court order.

Madikane says if they win this case, the City will have to rebuild the structure and reimburse the family for their loss and suffering. The City has not responded to questions on this matter.

Meanwhile, workmen are already on site digging trenches for infrastructure.