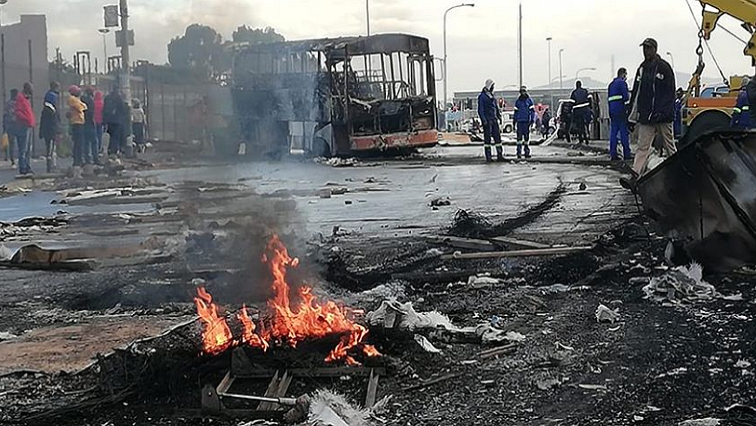 At least eleven people have been arrested in Philippi on the Cape Flats after a violent protest in the area. A Golden Arrow bus was torched and a container belonging to informal traders was set alight when residents of the nearby Siyangena informal settlement staged a protest demanding services.

Informal business traders in Philippi have suffered extensive damage during the early morning protests. One of the informal business owners Sibongile Manakele says they have lost everything.

“We keep all our clothes in this container after we are finished selling for the day. But today, we found this container on fire; nothing left. We have nothing to sell now. We rely on this business to feed our families. We bought new clothes in order to sell on payday. This is our only way of survival.”

A spokesperson for Golden Arrow Bronwen Dyke-Beyer says three buses have been set alight in different places around Cape Town since the start of the protests weeks ago.

Dyke-Beyer has condemned the acts.

“One of our drivers was robbed in the process and another suffered a neck injury. Golden Arrow condemns this criminal act in the strongest term possible. It’s not acceptable to attack innocent people and destroy the same vehicles helping people to leave their homes and accuses economic opportunities. Each bus costs approximately R2.4 million. This will affect our passengers. We call on SAPS to apprehend those who are responsible.”

Coto says they have been staying on the private land they illegally occupied in 2018 without electricity.

“We need services like water, toilets, and disaster management must get involved whenever we have a problem.”

Police have been deployed in the area to maintain law and order.