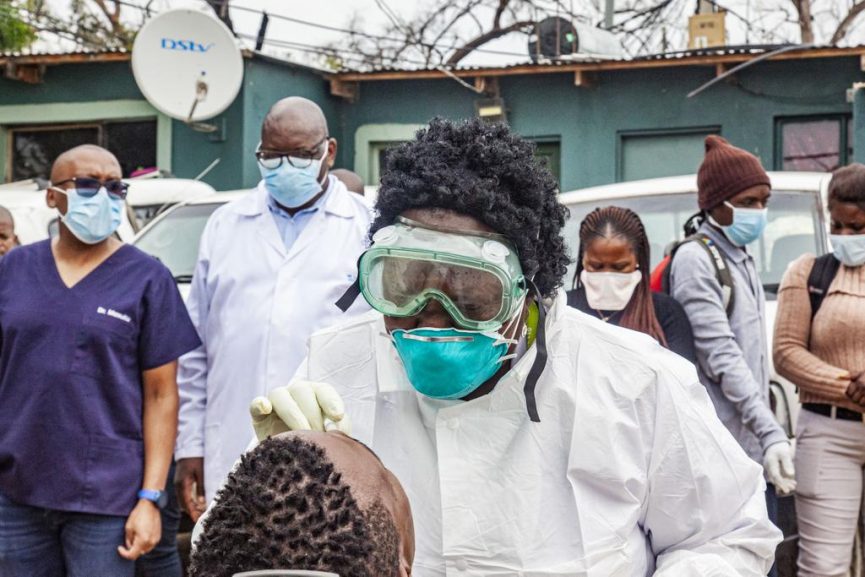 The Gauteng MEC for Economic Development Morakane Mosupyoe has called on residents in Alexandra, north of Johannesburg, not to flock to areas designated for COVID-19 testing.

South Africa has recorded 1353 coronavirus cases and five deaths and the testing stations are there to help slow the spread of the coronavirus.

On Monday, the Health Department confirmed a case of the virus in the township. The man and those who were in contact with him have been quarantined.

Mosupyoe says they are handing out sanitizers to assist residents in Alexandra.

He says, “The testing was done yesterday [Tuesday] by the premier and the MEC for health. It was concentrated in the area where the gentleman was identified, who had COVID-19, and then nine people were quarantined.”

“The minister will publish the areas where people can go for testing, but we are also pleading with the community that they should be careful and they shouldn’t flood the testing areas,” added Mosupyoe.

The Gauteng Government says it will be rolling out its province-wide sanitization solution programme in the fight against COVID-19, starting in Alexandra.

Human Settlements MEC Lebogang Maile says this is part of ongoing efforts to help curb and combat the spread of the coronavirus.

On Monday, the Gauteng Health Department confirmed that there was a confirmed case of the virus in the township.

The sanitization solution seeks to propel Section 24 of the Constitution by ensuring that all measures are put in place to protect and safeguard the rights of citizens against a harmful environment, which could arise out of the COVID-19 Outbreak.

The sanitization solution will comprise of the decontamination of public areas, fogging of public buildings and direct household sanitization.

Hand sanitizers will also be distributed to residents at the Hellen Joseph Hostel, Stjwetla informal settlement and Pan African Mall.

[IN PICTURES] Premier @David_Makhura and MEC Bandile Masuku in Alexandra today as part of the response to the call by President Ramaphosa for government to increasing testing. @bandilemasuku joined the Joburg District Health Services team and helped with the testing. pic.twitter.com/eEDIBHYLXp

Handling spread of COVID-19 in the townships

The Gauteng Health Department has warned that the coronavirus will be difficult to fight if it spreads to the country’s townships.

The department’s warning comes after five people were placed under quarantine in the densely-populated Alexandra township after being in close contact with a confirmed case of COVID-19.

The Alexandra resident disregarded instructions to remain in isolation after he tested positive and travelled to Limpopo where he was arrested.

The township is one of the areas in the country where some residents are not complying with the lockdown regulations.

The department’s spokesperson Kwara Kekana says, “The Department can confirm that there are five people who are currently under quarantine after being in close contact with a confirmed case. The confirmed case, tested and was instructed to remain under self-isolation while awaiting results.”

“Upon positive confirmation of results, our team of tracers working with law enforcement agencies tracked the confirmed case to Limpopo. He had disregarded an instruction and travelled outside of the province last week before the lockdown. He is currently under isolation in a health facility in Limpopo,” adds Kekana.