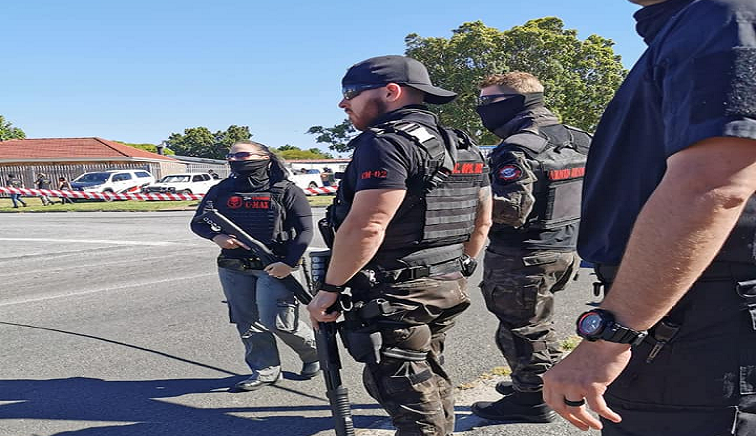 Western Cape Premier, Alan Winde, and his Education Minister, Debbie Schafer, have arrived at Brackenfell High for a meeting with school management. This follows a confrontation between the EFF and parents on Monday.

The EFF was protesting against an alleged whites only party for matriculants when they were confronted by parents outside the school gates.

“A police helicopter hovers overhead while there’s a police water cannon parked near the school gate. A number of private security vehicles are also stationed here and patrolling the street. Police and private security have asked the media to move away from the school gates to beyond the tape which they have used to cordon off the road.  A group of parents have gathered on an open field near the school saying they are here to protect their children. The violent clashes have been widely condemned with authorities appealing for calm.”

A heavy security presence is being maintained outside Brackenfell High following conflict between parents and the EFF yesterday.

Meanwhile, The EFF has vowed to intensify its campaign against alleged racism at Brackenfell High School in the Western Cape.

Schafer says the event was a private party and warned that if the EFF continues its protest action she will approach the courts to interdict them from disrupting the Grade 12 examinations.

EFF Western Cape Provincial Chairperson, Nosipho Makamba-Botya, expressed shock at the violence meted out to its members and says they went to the school following complaints received from various parents at the school over alleged racist practices.

Police say they arrested a 39-year-old man for discharging an air gun and are investigating a case of public violence.

The EFF has vowed to intensify its campaign against alleged racism at Brackenfell High School in the Western Cape. EFF…