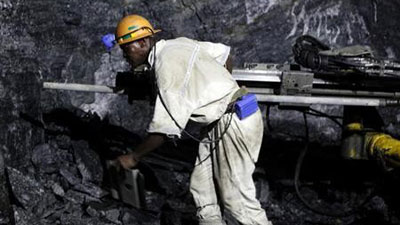 South African mining companies are bracing for a heavy hit from the country’s looming nationwide lockdown to slow the spread of the coronavirus, warning of an expected leap in costs in addition to their lost output.

A leading producer of metals and minerals such as platinum, palladium, coal, gold and iron ore, South Africa’s labour-intensive mining industry is a potential hotbed of infection among the thousands of miners who often work in confined spaces, with some living nearby in cramped accommodation.

President Cyril Ramaphosa on Monday imposed a 21-day lockdown from midnight on Thursday after a surge in coronavirus cases.

Furnaces and underground mines will have to be put on care and maintenance, which means operations would stop but are kept in a condition to reopen in future.

South Africa’s Minerals Council said it was exploring what would be required to prevent permanent damage of the sector.

“There are marginal and loss-making mines that would likely be unable to reopen should they be required to close fully, without remedial measures,” it said.

AngloGold Ashanti, owner of Mponeng – the world’s deepest mine – said it was developing plans to restore production safely. The gold miner has already suspended production at its Cerro Vanguardia mine in Argentina.

Pan African Resources said it has sufficient liquidity but would look to reschedule its short-term senior debt obligations in the event the lockdown extends into a prolonged period.

Harmony Gold said the shutdown would “negatively impact” its annual production guidance of 1.4 million ounces and its full-year earnings.

“This is an unprecedented time in the history of the mining industry and our country,” said Chief Executive Peter Steenkamp.

South32 also said it would withdraw its full-year guidance for South African operations, which include thermal coal, aluminum, manganese and a smelter.

Impala Platinum said it planning an orderly transition to care-and-maintenance status at its mining, smelting and refining operations while also working on an analysis of the impact.

“These are unprecedented and extraordinary times and we all need to make sacrifices for the greater good,” said Impala CEO Nico Muller.

Sibanye Stillwater, the world’s largest primary producer of platinum, and Anglo American Platinum said they would comply with government measures but could not comment further at this stage.

While miners try to quantify the financial impact from the crisis, the South Africa’s mining minister is meeting mining and energy executives on Tuesday to consider how to execute the lockdown.

Palladium prices surged as much as 12.7% on Tuesday for the biggest daily gain since 2000, spurred partly by concerns over supply. Spot gold and platinum also rose sharply.

“The country accounts for some 70% of global platinum mined supply and 35% of palladium, with a 21-day lockdown possibly resulting in a 4% and 2% of 2020 supply reduction,” said Dmitry Glushakov, head of metals and mining research at VTB Capital.

“We believe that this might provide significant support to PGM (platinum group metals) prices in the short term.”