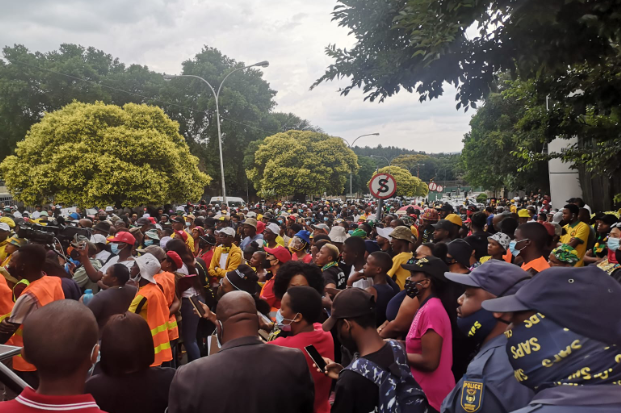 The SABC says it has contingency plans in place amid threats of “a blackout” on its platforms. The public broadcaster says these plans will kick in immediately should the need arise.

SABC employees have been protesting against the planned retrenchment of 400 permanent workers.

SABC acting spokesperson Mmoni Seapolelo says any employee who is involved in a “blackout” will have to face the consequences.

“The SABC has a statutory duty and public mandate to provide uninterrupted radio and television services for millions of South Africans; noting that many households depend primarily on the SABC for their information. We want to assure the public that we remain committed to delivering our public mandate of informing, educating and entertaining South Africans, irrespective of any planned misconduct or ill-discipline.”

SABC employees are hoping that the protest action and strike they’ve engaged in will force management sit up and listen to their concerns. Hundreds of employees took part in a protest led by the Communication Workers Union (CWU) and joined by political parties, including the ANC and EFF, at Auckland Park in Johannesburg.

The union has demanded an immediate end to the retrenchment process, as well as the withdrawal of letters of redundancy that have already been issued to workers. They also want the board to be dissolved and for the SABC to be placed under administration.

SABC workers say they can’t afford to lose their jobs.

“We have been working during the worst times with COVID-19, putting our lives at risk. I think anger is an understatement right now. We have no choice but to come out on the streets and protest and demand that they give our jobs back. It just came, it’s shocking. I’m just confused. SABC workers are losing their jobs. We have a management that has not been transparent about the process, taking unilateral decisions affecting our livelihoods. So it’s up to us to fight,” says one worker.

She’s now been declared Rakgadi general of the SABC, here’s @Chriseldalewis addressing the masses outside of the SABC Headquarters. #SABCNews pic.twitter.com/NbsNcgYedP

SABC Group CEO Madoda Mxakwe says management will respond to workers’ demands next week. Mxakwe accepted a memorandum of demands from the CWU at the public broadcaster’s headquarters in Auckland Park, Johannesburg.

The SABC has maintained that the retrenchments are part of the conditions it has to comply with after it was granted a bailout from National Treasury.

Meanwhile, SANEF says it’s concerned that the SABC’s critical public mandate has never been funded sufficiently by government despite promises over the years to do so. The Forum says government and political parties cannot speak about the importance of the SABC while failing to provide it with the necessary financial support to execute its mandate.