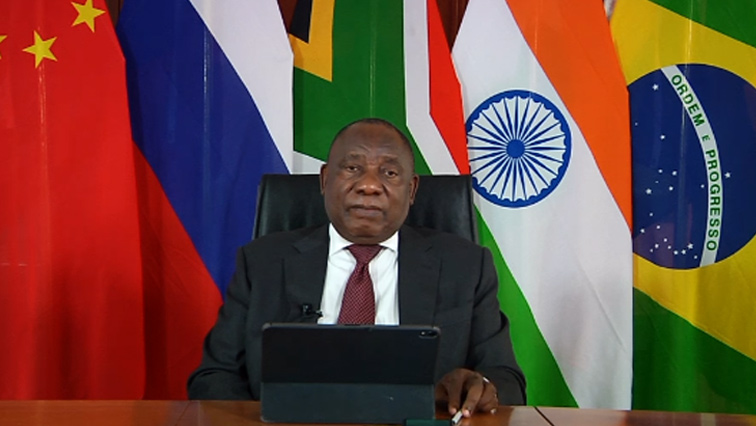 President Cyril Ramphosa has called on the international community and his counterparts in the developing nations group, BRICS, to support a comprehensive stimulus package for African countries.

Ramaphosa was speaking at the opening of the virtual BRICS summit. It was hosted by Russian President Vladamir Putin.

BRICS is an association of five major emerging countries, Brazil, Russia, India, China and South Africa, which together represent about 42% of the global population, 23% of GDP, 30% of the world’s territory and 18% of global trade.

Ramaphosa says that in response to the severe economic damage caused by the COVID-19 pandemic, a new global deal, as proposed by United Nations (UN) Secretary-General António Guterres, must be put in place.

“The New Development Bank has a significant role to play in all this to date the bank has approved four billion US dollars of COVID-related assistance projects including one billion rands to South Africa,” says Ramaphosa.

Ramaphosa says in Africa, COVID-19 has exposed the vulnerability of an over-dependence on fragile global supply chains even for basic foods and essential medical products.

Ramaphosa says the pandemic has shown the need to build more resilient national and regional supply-chains to enable the continent to respond more effectively to such crises in future.

“A central pillar of our national recovery is to diversify and upgrade our industrial capacity, supporting the wider processes of industrialisation across Africa. We call on our BRICS partners to ramp up investment in not just South Africa but across the continent.”

He added that COVID-19 has demonstrated the need to accelerate the establishment of the BRICS Vaccine Research and Development Centre in South Africa, as agreed in the 2018 Johannesburg Declaration.