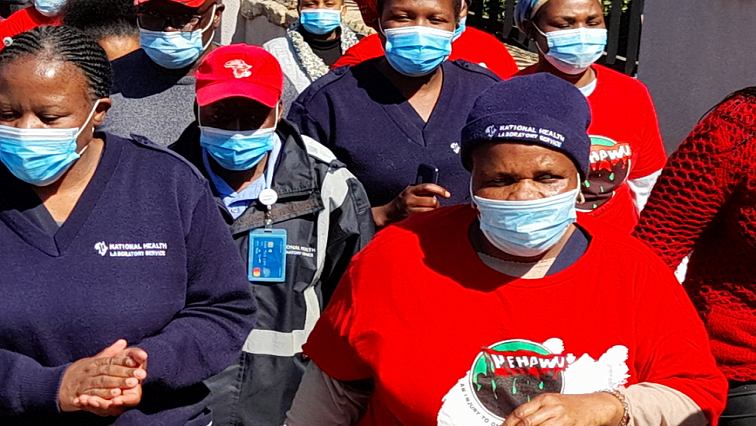 The National Education, Health and Allied Workers’ Union (Nehawu) says it will embark on a total shutdown if their demands are not met.

Nehawu members have begun gathering in front of the Nelson Mandela Bay City Hall in the Eastern Cape.

The protest action is in demonstration in line with the union’s national day of action.

The union says as frontline workers, members in the healthcare sector do not have adequate Personal Protective Equipment (PPE).

They are also demonstrating over a wage increase and against the corruption allegations with regard to COVID-19 funds and contracts.

They will have over a memorandum to the office of the Premier.

On Wednesday, Nehawu held a motorcade in honour of members who had died in the line of work.

The union has also held lunchtime pickets in the lead up to the national day of action.

Regional secretary, Sweetness Stokwe says they are adhering to all COVID-19 health guidelines and regulations.

“After there was a declaration that there is no money in government for them to be paid, they have seen a lot of corruption that has been taking place in the country, senior officials of government looting billions. There was 500 billion put aside to deal with COVID-19, only 20 billion was allocated to department of health nationally. Workers are demanding safety; they are demanding increment they are also demanding risk allowance because some of our members who died they were not supposed to die.”

On Monday, Nehawu briefed the media on the national programme of action to protect and defend workers against COVID-19:

In the video below, Nehawu held a National Day of Prayer across the country for frontline workers on Tuesday: