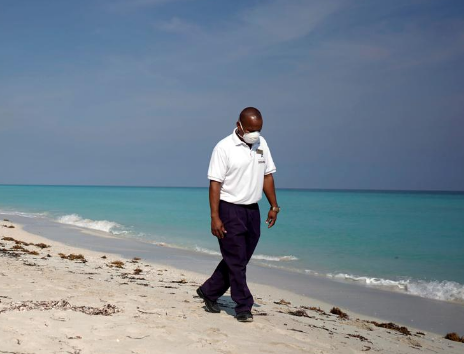 Cuba will test all visitors for coronavirus when it reopens to international tourism, which will be limited at first to the beach resorts at the keys of the Caribbean’s largest island, Prime Minister Manuel Marrero Cruz said on Wednesday.

Unveiling cautious plans for lifting Cuba’s partial lockdown, Marrero Cruz said specialists would conduct epidemiological monitoring at hotels, where occupation would be limited. Excursions would be restricted to the keys.

Visitors would not be able to visit Havana, the center of Cuba’s outbreak, at first.

In his presentation to the council of ministers, reported by state-run media, Marrero Cruz did not give a time frame for the reopening to tourism, one of the cash-strapped country’s top sources of hard currency.

The Prime Minister said Cuba would open first to domestic tourism and further details would be announced soon.

“There will not be a brusque opening in the first phase,” Marrero Cruz was quoted as saying, adding that avoiding a new outbreak was a priority.

New cases have dropped to less than 10 per day on average from a peak of around 50, and two thirds of the island is virus-free, according to official data.

A cluster of other Caribbean islands have already opened to international tourism or will do so this month – with tests mandatory for some and not for others.

Schools will reopen in September to finish the current year with the new one starting in November, while public and private transport will be restored gradually, he said.

Face masks will remain obligatory in all public spaces in a first phase, and then in spaces with a concentration of people.