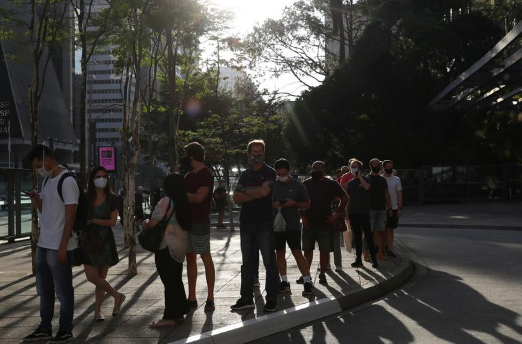 Brazilian shoppers lined up for hours and crowded into malls as they reopened on Thursday in the country’s two largest cities, epicenter of a still surging coronavirus epidemic in the South American nation.

Traffic jams formed in streets crowded with pedestrians outside shopping malls in Sao Paulo, where business resumed at 4p.m. for four hours after 83 days of closed doors.

Inside stores, strict distancing rules were followed and most shoppers wore protective masks even though Brazilian President Jair Bolsonaro has downplayed the gravity of the virus and pushed local authorities to lift quarantine measures.

According to the Brazilian shopping centers association Abrasce, lockdowns have cost the country’s 577 malls more than 25 billion reais ($5 billion) in lost business.

Tens of thousands of jobs have been lost and 10% of the shops have folded for good, the lobby group said.

In Rio de Janeiro, malls opened a week earlier than planned as businesses starved of income pushed authorities to lift restrictions even as public health experts warned it was too early to avoid a resurgence of contagion.

“I came to buy something quickly and them I’m leaving,” said Mariana, in a well spaced line outside a mall on Rio de Janeiro’s south side where a shopping chain manager said people were not lingering to window shop after purchases.

Brazil has had the world’s worst outbreak of the pandemic after the United States, with 40 919 deaths and more than 802 828 confirmed cases as of Thursday. Sao Paulo and Rio de Janeiro states have suffered 42% of the fatalities.

Many shops and businesses opened on Thursday even though it was the national holiday of Corpus Christi.

In the capital Brasilia, a mass was held in the Catholic Cathedral for the Corpus Christi feast, but attendance was cut to a third of the seats to maintain distancing. The priest handed out communion wafers but did not place them in the mouths of the faithful.

Cinemas in the malls were not allowed to open yet and eateries in food plazas could only sell meals for delivery.

“The rules on hygiene and distancing have to be strictly followed because the pandemic is not over and all shoppers must be aware of that,” said Vander Giordano, vice president of Multiplan, owner of 19 malls with 5 800 shops.

“We are not going to allow crowds to form,” he told Reuters.