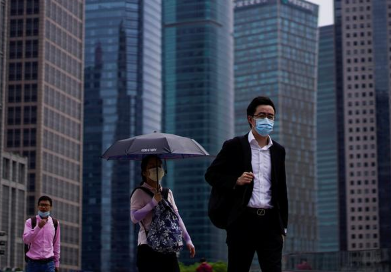 The COVID-19 epidemic has exacerbated already worrisome trends to doing business in China amid slowing revenue growth, regulatory obstacles and the clout of the state-owned sector, a European business group said on Wednesday.

Only half of European companies surveyed said that their mainland China revenues last year increased by 5% or more, the lowest proportion in a decade, according to a survey of members of the European Union Chamber of Commerce in China conducted in February that involved 626 respondents in all.

A slowdown in the world’s second largest economy was seen as the biggest business challenge by respondents. After widespread lockdowns to control the epidemic, China’s economy shrank by 6.8% in the first quarter, and the government dropped a growth target for the full year.

“The full extent of the negative impact from COVID-19 on revenue growth remains unclear, but the trend is undeniably bleak,” said the report.

Small and medium sized companies, and those in the chemicals, petroleum, automotive, construction, and logistics industries, were most likely to have seen falls in the growth of revenue and earnings before interest and tax in 2019, according to the report. These companies are also among those which have been hit hardest by the epidemic, it said.

Only “incremental” improvements to China’s regulatory environment were seen in 2019, according to the report, and 44% of surveyed members expected obstacles to increase over the next five years.

In addition, nearly half of respondents expected China’s powerful state-owned sector, a frequent source of complaints by foreign businesses, to gain opportunities at the expense of the private sector this year.

“The COVID-19 outbreak looks likely to further exacerbate this problem, with the government now turning to SOEs as a source of stability in uncertain times, which can only be achieved by draining yet more resources from the private sector,” said the report, referring to state-owned enterprises.