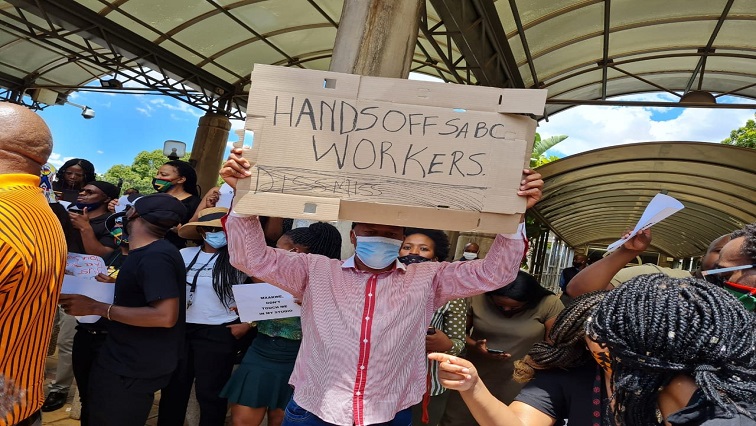 Trade union BEMAWU’s urgent court application to stop retrenchments at the SABC is expected to be heard today in the Labour Court in Johannesburg.

SABC management plans to retrench as many as 400 permanent staff as part of its restructuring process which has however been put on hold for 30 days to allow for further engagements with unions, government and other stakeholders.

The public broadcaster’s employees affiliated to another union, the CWU, have already embarked on a strike. Yesterday COSATU briefed the media in Braamfontein, Johannesburg.

General secretary Bheki Ntshalintshali, “The fact that very little has been done to fix the issues raised by the Auditor- General and that some of these institutions like SABC are pushing for retrenchments is offensive and scandalous. Government needs to work with labour and business to develop clear road maps to take these SOEs out of ICU, reposition them to adjust to the changes taking place in their sectors and enable them to get back on a sustainable trajectory.”

Meanwhile, the IFP says it has called on Parliament to debate the crisis at the SABC because it will not be resolved without outside independent help. The debate in Parliament will be held on Tuesday next week. The IFP’s Narend Singh says the country wants to see an end to the impasse at the public broadcaster.

“The board on the one hand and the unions are conflicted in that they trying to talk about their own issues and what we are going to be proposing amongst others is that one gets an independent consultant or firm of consultants that are au fait with matters of media to look at the SABC,  look at the staff structure and make recommendations that will be independent and that will advise the way forward and I think the minister herself has to be directed by that kind of response. We can not allow the public broadcaster to be run in the manner that it is run currently.”