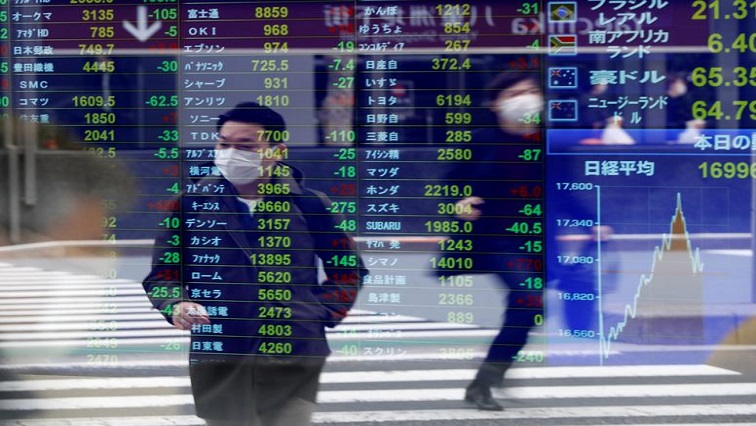 Asia’s stock markets had their worst session in two weeks on Friday following a tech-led plunge on Wall Street, though gains in safer assets like bonds and dollars were muted as investors awaited US job data to see if it triggers a bigger selloff.

MSCI’s broadest index of Asia-Pacific shares outside Japan fell 1.6% and looked set for a 2.4% weekly loss, its biggest since April.

That was shallower than the 5% plunge on the tech-heavy Nasdaq overnight or the S&P 500’s 3.5% drop. Those were the steepest Wall Street losses since June, but traders said a correction was overdue given recent frothy gains.

“It was steady rather than panic selling throughout,” said ING’s regional head of research Rob Carnell.

“It just doesn’t sound or feel like anything other than a bit of profit taking…if this was a massive risk-off move, you’d have expected the dollar to rally, and it didn’t really.”

The focus is on US payrolls figures due at 1230 GMT, which are seen as a possible selling trigger if it disappoints economists’ expectations that some 14 million jobs were created in August.

The dollar was steady, but a drop in the euro over last few days on talk that the European Central Bank is concerned about its strength had the greenback eying its best week in more than two months against a basket of currencies.

The euro seems to have arrested its slide for now, and sat at $1.1852. The Antipodeans were under gentle pressure while the yen was steady at 106.16 per dollar.

Bonds pared what was a pretty modest rise overnight, given the selloff in the equity market. Benchmark US 10-year bond yields rose 1.5 basis points on Friday, having fallen about 3 basis points overnight.

Thursday’s tumble was the biggest one-day percentage drop on the tech-focused Nasdaq 100 since March and the darling stocks of recent months were hit hardest.

Apple fell 8%, Tesla 9% and Microsoft 6%. Still, the plunge only wound the Nasdaq back as far as where it sat last Tuesday. It is still up 28% for the year so far and 73% higher than its March trough.

“However, this is unlikely to be a repeat of the tech wreck of the late 1990s, given how much the market and sector have changed,” he added.

Tech selling in Asia was limited. In South Korea Samsung fell 1.6% and there was modest pressure on Apple suppliers in Shanghai and Taipei. But falls in consumer staples and financials led losses on the Hong Kong and China bourses.

Australia’s soaring consumer lender Afterpay, which seems to track the tech sector, fell 5% and is set for its worst weekly percentage drop since March.

In commodity markets, the stronger dollar has kept pressure on prices. Oil was headed for a weekly loss amid worries about demand as the U.S. summer driving season draws to a close.

Gold drifted lower as equities sold off overnight but was last up 0.2% for the day at $1,934 an ounce.